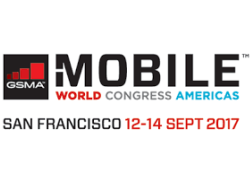 “For the first time in history, the leading entertainment city in the world will be the main stage for a mobile industry event of this magnitude – Mobile World Congress Americas will put the spotlight on the intersection of mobile with content, media and entertainment,” said Michael O’Hara, chief marketing officer, GSMA.

“There are now more than 5 billion mobile subscribers globally and mobile connects nearly everything in our lives – including content, media and entertainment. As technologies such as 5G, artificial intelligence, augmented reality, virtual reality, blockchain and others go mainstream, mobile will further transform the media and entertainment experience as we know it today.”

Leading executives in content, media and mobile to keynote

The GSMA announced that global leaders from across the mobile communications and media and entertainment industries are among the first keynote speakers confirmed for Mobile World Congress Americas, including:

Conference track sessions will explore leading trends and technologies including 5G, AI, augmented reality (AR), blockchain, IoT, connected vehicles, sports and entertainment, and much more. Executives and industry experts confirmed to speak in the conferences include:

4YFN returns to the Americas Spanning the three days of Mobile World Congress Americas, the Women4Tech program will kick off with a speed coaching and networking session a 4YFN panel discussion on Wednesday, September 12, followed by the Women4Tech Summit on Thursday, September 13. In the Summit, senior-level speakers will highlight leading practices and creative solutions to increase diversity in the workplace. Confirmed speakers participating in the broad Women4Tech program include:

For more information on the Women4Tech program, visit the link.

The GSMA announced that Mastercard has been confirmed as an event Featured Sponsor and Fortune as an Official Media Partner, alongside several other new exhibitors and participating companies for Mobile World Congress Americas, including ARM, Cisco, Dell, Gemalto, Google, IBM, Infosys, JMA Wireless, Kore Telematics, Mavenir, McAfee, Synchronoss and VMware.

The GSMA announced the first partner programs taking place at Mobile World Congress Americas. Coolpad will host a half-day partner program on Thursday, September 13, while NetComm Wireless will lead a Power Hour session on Friday, September 14. Both partner events will take place in the Theater District in Concourse Hall, level 2 of the LACC.

Returning to Mobile World Congress Americas are the IoT Talks which provide a platform for thought leaders and industry experts to share ideas about the wider societal impact of IoT. The first confirmed IoT Talks will be presented by 3Z Telecom, Athonet, BICS, CSG International and SAP. For more information on the IoT Talks,click here.