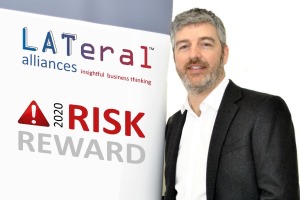 Could competition and consolidation turn to consortium and collaboration?

It was no different for the risk management software vendors that supported these telecommunication businesses, consolidation has continuously occurred over the last 30 years culminating with the recent WeDo Technologies and MDS Global acquisitions. In July 2019, Mobileum acquired WeDo Technologies, the leading fraud and business assurance solution provider had dominated the telecom risk management market for many years, headed up by the charismatic Rui Paiva. WeDo Technologies was not alone, not long after, another acquisition announcement, this time MDS Global purchased by Volaris Group. 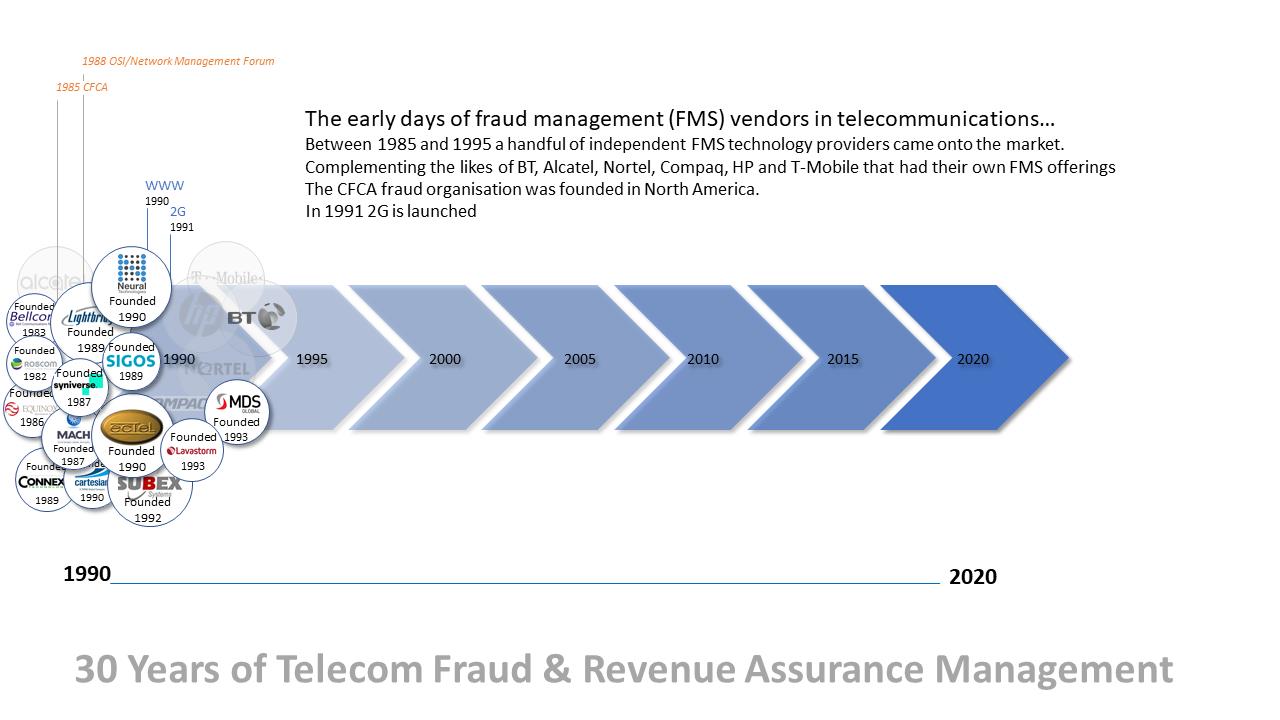 Some of the founding companies in telecommunication risk management software/hardware offerings started before 1990, including the likes of Roscom, Equinox, and Sigos. Thirty years later, these businesses are still going strong. Equinox founded in 1986 has worked with over 300 businesses in the past 30+ years with many of the North American carriers using or have used Equinox.

Roscom with its grounding in engineering measurement has been offering test and measurement offerings to the telecommunications industry since 1982 from its base in the North of England. Sigos now offering end to end quality of service (QoS) and quality of experience (QoE) as well as their traditional fraud management solutions in nearly 150 countries.

As well as the vendors and service providers, organisations started to pop up, CFCA – Communications Fraud Control Association was founded in North America in 1985, recognising a collaborative approach was required to support carriers in mitigating fraud and risk. Today it is still hosting events and seminars and providing risk management insights to the telecoms industry.

It was in the late 1990s when large telecom organisations such as Nortel, BT, Deutsche Telecom, General Telephone & Electronics Corporation which had initially developed their own internal FMS systems to support their customers spun of their proprietary technology out.  Cerebrus Solutions was spun out of Nortel in 2001 focused on fraud management. Cerebrus was eventually merged with Neural Technologies (founded in 1990) who shared common investors in 2005.

Azure was spun out of BT with its own fraud management technology in 2003 (the FMS technology can be traced back to BT in the early 1990s). The next year it purchased what probably is regarded as one of the first cost and revenue assurance product companies – Connexn Technologies, based in the US. 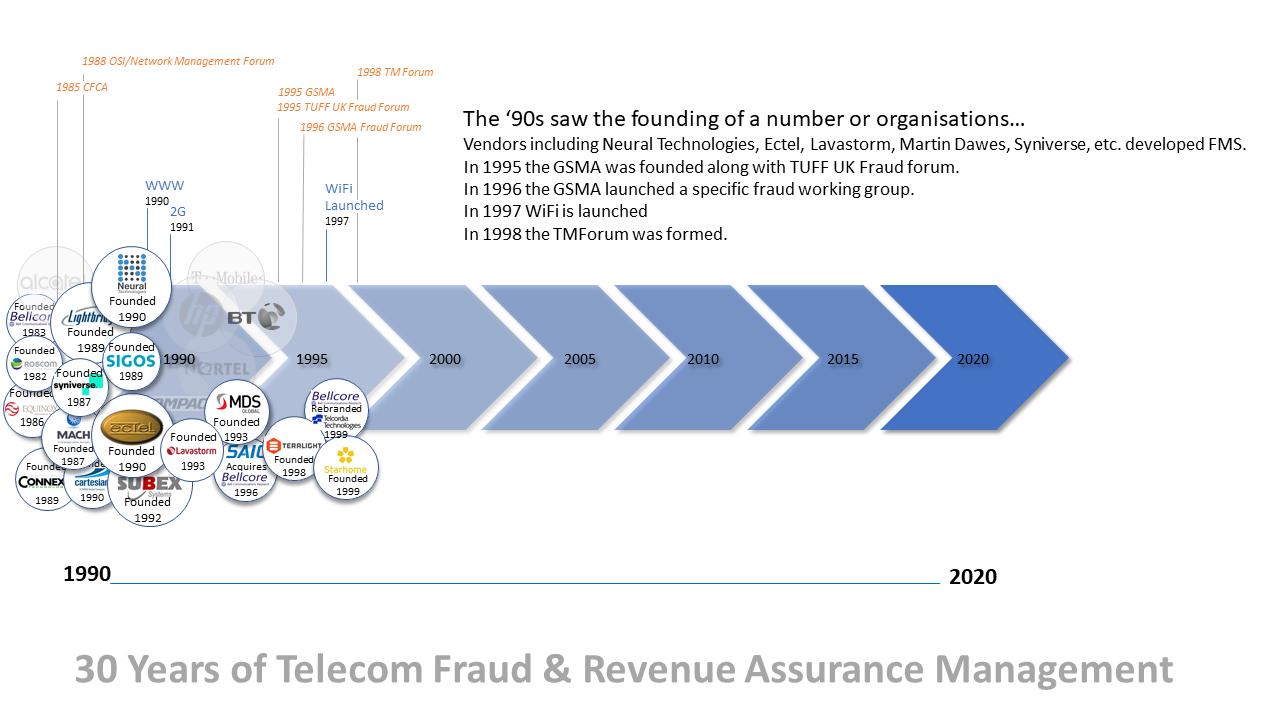 During the decade between 1990 and 2000, fraud management was the major business requirement, fraud was a recognised revenue loss for telecommunication providers, as fixed and mobile businesses grew and expanded their businesses. North America, saw the deregulation of the telecoms industry and the former ‘Baby Bells’ found competition with an explosion of Competitive local exchange carriers (CLECs).

In the latter half of the decade, the recognised ‘big 4’ – Subex, ECtel, Neural Technologies and Compaq, battled it out for fraud management solution deployment opportunities around the world. 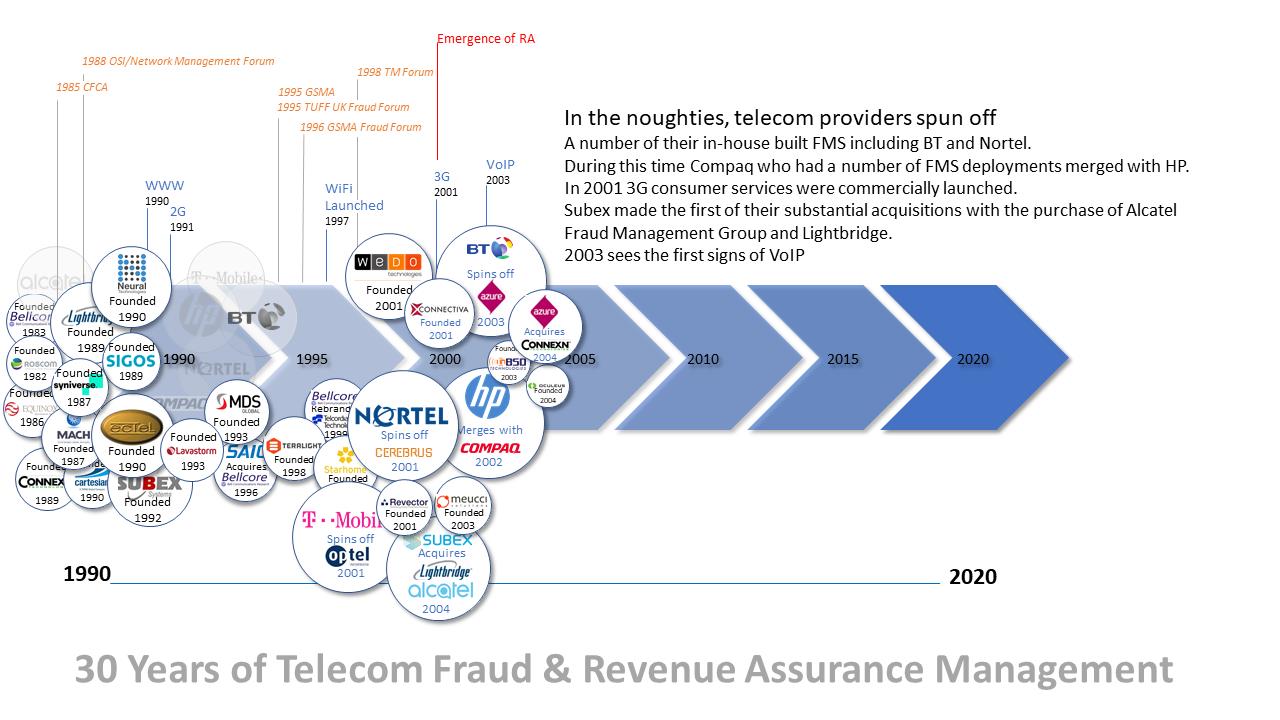 2001 saw the ‘dot.com bubble’ burst in spectacular style, the fantastic growth of telecom service providers and dot.com companies running of the internet, saw corporate values dramatically realigned, the days of corporate values based on subscriber acquisition suddenly focused on margins and probability.

Subex founded in 1992 purchased Alcatel’s and Lightbridge’ fraud management assets ten years later and increased their customer footprint and went onto acquire BT’s spun out fraud management technology, Azure Solutions in 2006.  Subex overstretched themselves in 2007, when it acquired Syndesis in an all-cash deal worth $165 million (€148 million), for which it had to leverage itself.

Unfortunately, the acquisition coincided with a global stock markets collapse in the same year. It took another ten years to be debt free. Today Subex has widened its focus to IoT and security as well as incubating a separate company called CrunchMetrics focused on anomaly detection with AI and machine learning.

cVidya Networks Inc. was acquired by Amdocs in 2015 and had a long history, founded in 1990 in Israel as ECI Telesystems Ltd, it changed its name to ECtel Ltd. in 1998. In 2010, ECtel, Ltd. operated as a subsidiary of cVidya Networks Inc. In early 2016 Amdocs announced the purchase of cVidya and it has since been absorbed into this US$4.0 billion (€3.0 billion) turnover software and services company. 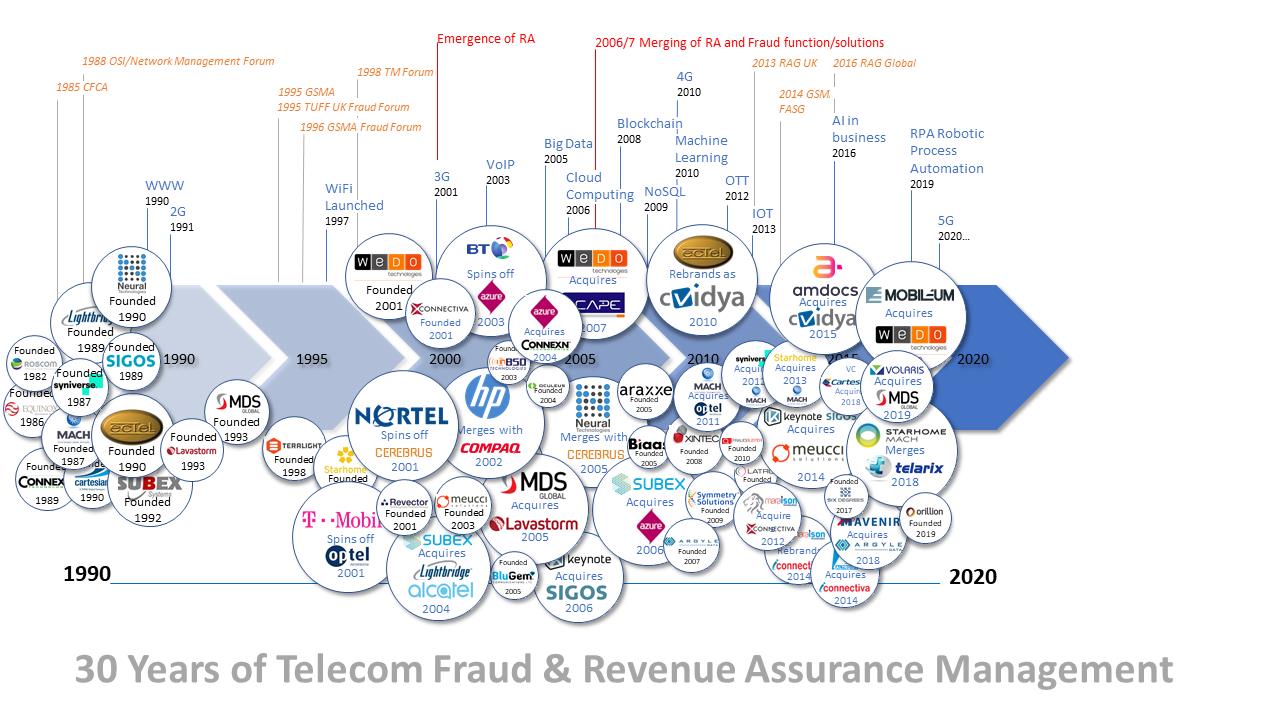 Hewlett Packard’s (HP) merger with Compaq in 2002 meant that Compaq’s fraud management system which had a widely recognised acronym of ‘CFMS’ and a substantial global footprint in particular Latin America, would eventually fall under the HP brand and continued in the telecom fraud management space for many years, only really losing impetus in the last decade.

The ten years before the beginning of this century, saw the founding of several industry forums and bodies joining CFCA, including the GSMA Fraud Forum, TM Forum and the UK Fraud Forum (TUFF).  The need to work collaboratively and share ideas and insights to fight fraud was recognised.

In the early part of this century, people did not just talk about fraud, departments started to talk about revenue assurance.  The ‘big 4’ became the ‘big 5’ and every Request for Quotation, Information and Proposal that involved telecom fraud management or revenue assurance now saw WeDo Technologies,  Subex, Ectel, Neural Technologies and HP regularly battle it out.