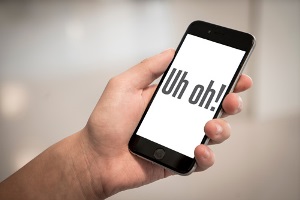 When Sprint launched its Cut Your Bill in Half campaign in December 2014, it wouldn’t work with iOS devices. The campaign was praised for its innovation and aggressiveness and was an initial success, says Ed Finegold, author, analyst, and digital start-up veteran. It invited prospects from any major competitor to upload their bills to Sprint’s website to receive a custom offer. The offer would match the prospect’s data allotment and cut their current rate plan cost in half. Bolstered by a torrent of bombastic TV ads, the campaign attracted millions of curious users. But no one knows how many sales were lost because of a failure to implement a mobile-first design.

No good for iPhone

People with iPhones – the highest value cohort – were greeted with a page that screamed, “Uh oh! Better get a bigger screen”. It encouraged the user to grab a PC and try again. This was a cringeworthy violation of the mobile-first principle; that it was perpetrated by a mobile operator on the front end of a massive, multi-million-dollar campaign only made it worse. At the time, I led strategy and sales for the digital start-up that had created the bill upload and offer engine. Our patented technology could scan a PDF bill, feed relevant data to an analytics engine, and return a personalised offer to the user in milliseconds. While our team delivered this enabling solution in a short window against a hard holiday deadline, Sprint’s digital team built the front-end. The campaign launched on time, but with this iOS-unfriendly flaw. As soon as we discovered the issue post-launch, we called for a meeting and proposed to build a simple app that would solve the problem. iOS had no native means of uploading a file to a website, so our CTO devised a means of using the iOS “Open with” function to load a PDF into the solution while it was open in an iPhone’s browser. We offered the app to Sprint for free because while we had been paid a lump sum on delivery, we also earned a per-transaction fee for every bill upload and knew half the smartphone population was cut off from the campaign.

When we met with Sprint’s senior technology leaders, including C-levels, we were stunned to find that they weren’t aware of the problem. Our team was the first to show them the “Uh oh!” screen. The only explanation we could think of for this error was based on how meetings were run at Sprint HQ. Demonstrations were shown in full screen mode on a large screen in a conference room; this is a problem I have also seen on other corporate campuses. Had anyone demonstrated the user experience on an iOS device or emulator, they’d have found the problem easily. We guessed the digital team, in a race to get to Yes, simply never brought it up. And clearly, no executive had pressed to see a mobile-first design. Once aware of the problem and our proposed solution, Sprint let us launch the iOS app. It was our first opportunity to deliver a customer experience (CX) component for them; we submitted it to the app store rapidly and it helped to increase uploads and acquire iPhone users. In other words, identifying and fixing this problem paid off for us and our customer.

Mobile-first is a must have

Mobile-first customer experience design is not a new concept. In late 2016 research firms reported that access to web sites via mobile devices had surpassed PCs for the first time. We have had at least four years to acknowledge that mobile-first web design is a must-have, not simply a nice-to-have. Yet, online shopping experiences, particularly those that U.S. mobile operators offer today, continue to defy this basic rule; buying your next mobile phone from your current mobile phone continues to be difficult. For example, when shopping with T-Mobile US, the experience is interrupted immediately with two pop-ups. The first asks the user to share location, which I won’t. The second proposes a user satisfaction survey. That’s two taps that prevent a prospect from shopping. The screen is also crowded; a “chat with an expert” button occludes the view and can’t be dismissed. Financing options for the chosen device prevent one from choosing a plan. The shopping process hits a dead stop. If I wanted to switch to T-Mobile, its web design would stop me from doing it via my mobile phone. AT&T is no better. Screens are slow to load and are clearly designed PC-first. Navigation is convoluted. There’s no way to compare offer data on one screen. When I login, the site struggles to retrieve my plan and usage information; a known issue given a message that says to refresh the screen if this happens. The experience also suffers from screen crowding and buttons that respond poorly to touch. The experience isn’t great from a PC either, but it’s clearly a PC-first design that is closer to Web 1.0 than digitally transformed. There may be dozens of reasons why these experiences are not mobile-friendly. Legacy integrations likely factor in. Product complexity, regulatory compliance requirements and integration of multiple components often wreak havoc for experience designers. Whatever the reasons, the result should not be that a customer can’t shop from a mobile device on your site. Mobile-first design is a must-have in the digital world. Mobile operators should be leading the way, not playing catch-up. The most important requirement is to make it easy for customers to buy things the way they prefer, just like Amazon does. Presented with even a few hurdles, like a pop-up survey or random notification, users lose interest. The author is Ed Finegold, author, analyst, and digital start-up veteran. Comment on this article below or via Twitter: @VanillaPlus OR @jcvplus