The challenge of comms education, and what the Internet of Things will do next 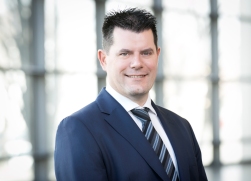 Ronan Kelly, ADTRAN’s chief technology officer for EMEA and APAC, is a provider of light in the software-defined access space and chairman of the FTTH Council. Here he tells us what guided him here and what matters to him.

Vanilla Plus: What is your role and who do you work for?

Ronan Kelly: My role with ADTRAN is the CTO for Europe, Middle East & Africa and Asia-Pacific.

Vanilla Plus: How long have you been in IT?

RK: I have been engaged in technology throughout my career, which spans over 25 years now. My early roles focused on the electronic repairs of early internet access equipment, like dialup access concentrators.

Vanilla Plus: What has been your most interesting project to date?

RK: Fortunately, I have a long list of fascinating projects that I have been engaged in throughout the years, however my time spent with start-up telecom operator Smart Telecom was definitely the most interesting to date.

In Smart we were constantly breaking industry norms. We deployed so many disruptive and innovative services, all with a tiny passionate team who wanted to change the face of the Irish telecoms market.

Vanilla Plus: What is your biggest challenge at the moment?

Right at this moment in the broadband access space, it is reminiscent of the late 1990s when multiprotocol label switching (MPLS) technologies were beginning to emerge. Many recognised the potential of the new approach, but equally many others struggled to understand or see the opportunity. This was compounded by a scarcity in engineering resources that understood the new approach.

Roll forward 20 years and we now have the same situation with SDN and NFV technologies. There is a large task ahead for the industry in driving awareness of the real potential, and educating the broader engineering resources so that they can deploy and maintain these disruptive approaches.

Vanilla Plus: What technology were you working with 10 years ago?

RK: Ten years ago I was leading a fantastic team in Smart Telecom where we were rolling out a multitude of innovative technologies. We were delivering carrier ethernet over resilient packet ring networks and microwave radios. We were also in the later stages of our ADSL2+ deployments, over which we were deploying MPEG4 IPTV services, which were directly integrated with our voice softswitch, permitting a range of innovative features, many of which are only now making their way into other mainstream platforms.

Vanilla Plus: What is your favourite technology of all time?

RK: It is a difficult one to call, as there are two close contenders. The first would be Ethernet. The tenacity this technology has demonstrated throughout the years is outstanding. Starting out with sub 10Mbps data rates over coaxial cables, Ethernet has evolved over copper and onwards to fibre, where today it delivers speeds of 100Gbps. Suffice to say this technology will continue to evolve into the future where it will form the basis of all connectivity, bypassing proprietary bus technologies and transport technologies.

The second is Wi-Fi. From my first experiences of 802.11b, which claimed an 11Mbps rate (realistically achieved 2 or 3Mbps), this technology set us all free. No longer are we chained to our desks. Like Ethernet, this technology has continued to evolve, to the point now where implementations of Wave II 802.11ac can achieve multiple Gbps throughput rates.

Without question these two technologies have, and will continue, to underpin our digital lives for many decades to come.

Vanilla Plus: How will the Internet of Things affect your organisation?

RK: More devices equal more traffic, which equals greater demands on fixed and wireless access infrastructures, which correlates well with the areas ADTRAN seeks to innovate. In addition to this, competing low powered WAN networks like SigFox and LoRa are being built to compete for IoT business. This is resulting in the expansion of the cell site backhaul market which is also extremely positive for our backhaul business.

Vanilla Plus: What smartphone do you use?

Vanilla Plus: What three apps could you not live without?

RK: If you ignore email, phone and text, then the three apps would be:

TripIt – Keeping track of hundreds of travel itineraries per year would be impossible without its ability to compress and sort these into a quick-to-access and structured format.

FaceTime is critical for keeping in touch with my family, especially my children. Seeing each other every day while travelling is critically important.

Vanilla Plus: If you weren’t doing the job you’re doing now, what would you be doing?

RK: I’ve got a passion for mechanical engineering, so I suspect it would be something in that space.