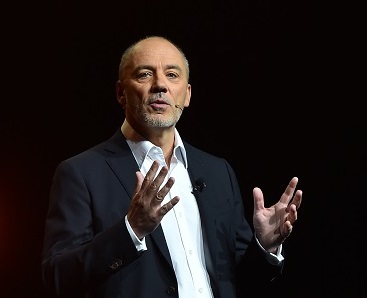 Stephane Richard, CEO of Orange: Tell me your hopes and fears for 5G

(WEEK IN TELCO IT) — Orange is already exploring future uses of 5G, but it really needs to know what clients want. Meanwhile, as Jeremy Cowan reports, it looks like Apple has chosen the least worst outcome of four unpalatable scenarios.


Orange has big ambitions to develop future uses of 5G. Orange intends to take a 5G lead in Europe — I have that on good authority from Stéphane Richard, Orange Group’s chairman & CEO, who said so today at the Orange Business Summit in Paris.

The summit brought together more than 1,000 enterprise customers of Orange Business Services to hear the France-based network operator describe its commitment to work with businesses on 5G. But he wants them to do more than listen. “5G will not be just another new development in mobile uses,” says Richard. “This is a technological leap that announces a significant transformation of business models for all companies and in all sectors of activity. To take advantage of the opportunities available, companies must anticipate their application cases without delay, and we, operators, must be fully mobilised to support them and develop solutions that meet their needs.

“The story of 5G has to be written together. More broadly, we must make every effort to make France one of the leading countries in the development of 5G. This future network is an opportunity to unite and consolidate all our resources, our know-how, our advanced industries, our French Tech and our talents at the service of our country.”

Orange also announced several joint innovation projects with companies in the manufacturing, energy and transport sectors. These include:

Developing a “ground-breaking prototype factory” with LACROIX Group. Trials will involve setting up an indoor network to test ambient connectivity on the industrial site, or optimising production using automated and other 5G-connected vehicles.

Renault, Orange and Ericsson are working together on connected vehicles to measure 5G’s capacity to enhance communications between vehicles and their environment, i.e. other vehicles, highway infrastructure such as traffic lights.

In partnership with national rail operator SNCF and Nokia, Orange is to provide a high-speed, HD video download service for passengers at Rennes train station, launching the service in 2020.

Orange Group will continue to implement its 5G deployment strategy, with 5G connections being installed in 17 European towns and cities in 2019, for commercial use in 2020.

Were you puzzled by Huawei’s statement on Monday that the Chinese telecoms giant had not discussed selling its 5G chips to Apple? Perhaps you put it down to the ongoing allegations about Huawei’s  indecently close relationship with the Chinese government, and consequent security fears. Either way, as reported by CNBC on Tuesday, one of Huawei’s rotating chairmen, Ken Hu said the Shenzhen-based enterprise had not held discussions about selling 5G chips to Apple. Ren Zhengfei, Huawei’s founder and CEO, then added that the company is “open” to selling Apple its 5G modems.

A lot more light was shed on this the next day, when it was announced that Qualcomm and Apple had unexpectedly settled their long-running, damaging and costly legal battle. The US chipmaker would now be supplying 5G silicon for next gen iPhones. A deceptively anodyne statement said:

Qualcomm and Apple® today announced an agreement to dismiss all litigation between the two companies worldwide. The settlement includes a payment from Apple to Qualcomm. The companies also have reached a six-year license agreement, effective as of April 1, 2019, including a two-year option to extend, and a multiyear chipset supply agreement.

One explanation for Apple’s capitulation came on Wednesday from CNBC’s Steve Kovach who said that Apple had been faced with “four terrible options” as it tries to ready the iPhone for 5G, so it chose the least worst route. The alternatives were:

1) Do a deal with Qualcomm to end all outstanding litigation and take its 5G chips
2) Hope that Intel would catch up in 5G. Intel has since renounced all plans to make a 5G modem
3) Turn to China’s Huawei for supplies, knowing the security questions that would follow from US politicians, partners and customers, or
4) Design and build its own 5G chips, knowing that others in the market had a head start.

It’s a compelling argument for Apple swallowing a huge slice of humble pie. In the circumstances Option 1 carried the fewest risks and offered the greatest chance of sustained success for the iPhone.