The need to profit from scale drives the deal as Nokia Board agrees €15.6bn bid for Alcatel-Lucent 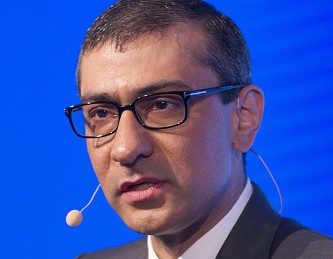 Rajeev Suri will be CEO of the new Nokia

ANALYSIS: The merger 10 years ago of France-based Alcatel and the USA’s Lucent has been cited in the past as a shotgun marriage of ill-matched business cultures, and for a time some inside and outside the merged entity remained pessimistic about its future. So the news this week that Nokia has made a friendly bid of €15.6 billion (US$16.6 billion) for Alcatel-Lucent caused a stir. Here Jeremy Cowan examines how the deal is now being viewed.

Nokia confirmed this week that its Board of Directors has agreed to merge with its network technology and services provider rival Alcatel-Lucent (ALU), offering €15.6 billion for the shares (a 28% premium for ALU shareholders). The all-paper deal is expected to close in the first half of 2016, subject to regulatory approval. Each company’s Board of Directors has approved the terms of the proposed transaction.

At present, these two businesses occupy the second tier by scale, but will now join forces in a company that ranks second in the world by market capitalisation, with combined net sales of €25.9 billion in 2014. At €300 million their combined operating profit is currently 25% of Ericsson’s, despite similar sales. Ericsson reported annual net sales in 2014 of SEK228 billion (€24.4 billion), virtually unchanged on 2013 revenues of SEK227.4 billion (€24.3 billion). From this Ericsson achieved an annual net profit in 2014 of SEK11.1 billion (€1.18 billion), a slight fall on 2013 earnings of SEK12.2 billion (€1.3 billion).

So, what lies behind the deal?

That the Finnish company once again has the balance sheet to be able to offer such a sum is proof of Nokia’s revival under the leadership of CEO, Rajeev Suri following the end of the joint venture Nokia Siemens Networks. One motivation above all others seems to be driving it, the need for scale in the higher reaches of the network equipment market.

What other factors are behind the acquisition though? And what effect will it have on competitors such as Ericsson and Huawei, the heavyweights that have been slugging it out in the market. And what are the implications for other players such as Juniper?

As Frost & Sullivan’s senior analyst for Information & Communication Technologies, Europe, Sheridan Nye says, “This long-awaited move is primarily a defensive one. Neither Nokia nor Alcatel-Lucent alone could realistically take significant share from market-leader Ericsson, or fight off aggressive competition from Huawei. The merger creates a competitor that is stronger than the sum of its two parts. The timing is also good as both companies have completed the worst of their cost cutting programmes and Nokia has extracted itself from the lacklustre Nokia Siemens Networks (NSN) joint venture.”

But, as Nye adds, the challenge is to convince employees and shareholders that cultural integration will be more effective than at either Alcatel-Lucent or NSN, both of which suffered from fragmented governance of merged companies with strong cultures and histories. When Alcatel merged with Lucent, AT&T’s former technology arm, the deal failed to realise its potential. Nonetheless AlcaLu’s customer base in North America is its most valuable asset. Nokia now needs to convince competition regulators to approve the deal – notably in the US and China.

Is this a Nokia takeover?

This deal may have been pitched as a merger of equals, but is it a takeover in all but name? The bid is Nokia’s, the new company will be called Nokia Corporation and headquartered in Finland, and Nokia’s Rajeev Suri will continue as CEO. If the deal receives regulatory approval and completes, Nokia shareholders will own 66.5% of the fully diluted share capital of the combined company, and Alcatel-Lucent shareholders 33.5% of the new business. The new board of directors will have 9 or 10 members with three coming from Alcatel-Lucent. So you can draw your own conclusions.

Nokia sold its mobile handset unit to Microsoft last year. Since selling its mobile phone business the company has refocused on its telecommunications and broadband offerings. Prior to the bid news there had already been media reports that Nokia was considering selling its HERE maps business, which last year had net sales of around €969 million. Disruptive Views reported, “Analysts have seen little synergy between the unit and Nokia’s mainstay network gear business, and Nokia has hired a financial adviser to explore a sale.”

Patrick Kelly, founder and principal analyst at Appledore Research Group, asks rhetorically why the deal is happening now when it is thought that merger talks have been continuing on and off since 2013. “Virtualisation, cloud computing, mobility, and big data analytics are significant technology transformation drivers creating entirely new markets,” says Kelly. “This is facilitating rapid changes in how communication services are ordered, provisioned, and delivered. Virtualisation offers the promise of 10x-100x improvements in cycle time and operational expenses during the Lead-to-Service process interval, and a similar benefit in support for customised and on-demand product packages. It’s about agility – creating a new offer and delivering the service in hours not months.”

“Appledore Research Group forecast that NFV and software-defined networking (SDN) technology spending will reach $72 billion in 2020. A massive substitution will take place over the next five years from purpose-built hardware to programmable network elements running on commodity based generic hardware. Nokia and Alcatel-Lucent will not only compete with traditional competitors such as Ericsson, Cisco, and Huawei but also new IT companies such as HP, IBM, Oracle, and EMC.”

Besides virtualisation the combined enterprise will be able to continue research in technologies such 5G, cloud, data analytics, IP and SDN. In 2014 the two companies spent a combined total of €4.7 billion on R&D. Nokia brings its FutureWorks research and development facilities to the party and Alcatel-Lucent its Bell Labs, with R&D staff totalling 40,000 employees.

Numerous industry watchers believe that this could be just the start of a series of acquisitions, or mergers in the sector, with the names of Juniper, Ciena and Infinera being mentioned as possible targets for Ericsson or Cisco, although Juniper could even turn acquirer.