Bell to expand fibre internet access to over 117,000 homes and businesses throughout Ontario 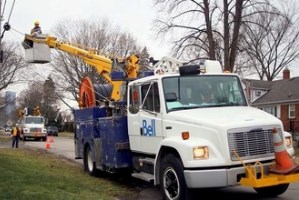 4 August 2022 – Bell has announced a large-scale investment in broadband infrastructure as part of the Ontario Accelerated High Speed Internet Programme (AHSIP). Bell is investing over $650 million (€636.83 million) in partnership with a Government of Ontario investment of $484 million (€474.20 million) for this historic program.

Bell will deploy its all-fibre network to over 80,000 homes and businesses in underserved regions across Ontario as part of AHSIP by 2025. Bell was a key participant in the AHSIP auction by Infrastructure Ontario, winning lots in many communities throughout the province, including: Bracebridge, Carleton Place, French River, Hastings Highlands, Huntsville, Kenora, Madoc, McKellar, Mississippi Mills, Nipissing, Renfrew, Sundridge, Thunder Bay and Timmins.

“Bell is proud to partner with the Government of Ontario on this historic initiative to bring our all-fibre broadband network to even more hard to reach communities across the province,” says Mirko Bibic, president and CEO of BCE and Bell. “In 2022 alone, Bell’s capital expenditures will reach approximately $5 billion (€4.90 billion), an unprecedented commitment to invest in building better communities across Canada, made possible by progressive policies at all levels of government to encourage facilities-based competition and investment.”

Another benefit from its participation in AHSIP is that Bell will also fully fund fibre deployment to an additional 37,000 homes and businesses in the vicinity of its AHSIP build to reach even more Canadians with this broadband technology. Bell’s award-winning network will provide fast and high-capacity 100% fibre connections with Internet download speeds of up to 3 Gbps and access to leading Bell services such as Fibe TV.

Enabled by a positive investment climate reflecting government support for facilities-based competition and policies that prioritise investment in our networks, Bell’s participation in AHSIP is in line with its past participation in government programs such as the federal Universal Broadband Fund (UBF), and Ontario’s Southwestern Integrated Fibre Technology (SWIFT) program and Improving Connectivity for Ontario (ICON) program. Our participation in these programs provides options for expansion in rural areas and smaller communities that can’t be funded by private investment alone.

Bell is undertaking its most aggressive fibre buildout ever in 2022, with plans to reach up to 900,000 more homes and businesses across much of Canada with direct fibre connections. By the end of this year, Bell will have invested approximately $14 billion (€13.72 billion) in capital expenditures since 2020, including planned capital expenditures of approximately $5 billion (€4.90 billion) in 2022, the highest amount ever by a Canadian telecom company in both a single year and over a three-year cycle. These investments are going towards our fibre-to-the-home, 5G wireless and core networks, as well as our ongoing expansion into rural and remote communities, as well as on boosting capacity and ensuring resiliency.

Connecting more Canadians with fast, reliable and high-capacity broadband is at the heart of our purpose to advance how Canadians connect with each other and the world, and is also a key pillar of our Bell for Better ESG commitments. As part of these commitments, Bell is expanding its fibre and Wireless Home Internet footprints to underserved communities across Ontario, including First Nations, and providing telecommunications infrastructure that creates jobs, advances trade and contributes to economic growth.