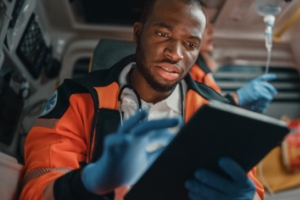 Bellevue, Washington – Messaging all first responders!, T-Mobile has announced first responders’ data is top priority on the Un-carrier’s network automatically and for free when the agency is enrolled in Wireless Priority Service (WPS). T-Mobile is the wireless provider to add data priority in collaboration with the Department of Homeland Security’s (DHS) Cybersecurity and Infrastructure Security Agency (CISA). This is yet another benefit of T-Mobile’s groundbreaking Connecting Heroes program, with a streamlined WPS eligibility process.

Working with CISA, T-Mobile is simplifying the process for first responders with WPS by making their data priority automatic, and not requiring them to register for it or pay an extra fee. Now, when seconds matter during times of emergency or network congestion, critical communication is prioritised across a first responder’s smartphone, hotspot and/or tablet. Plus, during extreme network congestion or limited connection, the Un-carrier commits available network resources to help maintain a minimum performance of 512kbps for applications. This means, if a first responder is in a situation where a natural disaster may impact service, T-Mobile will give network resources to them first. Similarly, if a first responder is using data in a low-coverage area, the network will automatically reallocate resources to help maintain that critical connection.

“We know in an emergency, every second counts and it’s crucial our first responders can communicate with each other whether it’s calling or sending a message. That’s why we’re working with DHS to roll out data priority so we can be sure that the customers who need it most are getting it without a hassle,” says George Fischer, SVP of sales, T-Mobile Business Group. “T-Mobile won’t stop when it comes to helping our first responders stay connected in the most extreme situations and part of that is ensuring access on our network to those that need it, when they need it most.”

T-Mobile’s nationwide 5G is a game-changer for first responders who need fast speeds, high capacity and low latency. T-Mobile is the most awarded 5G network in the nation with more than 20 reports in the last two years from third-party industry providers like Ookla and umlaut granting T-Mobile 5G top marks. As America’s 5G provider with the most reliable 5G network, the Un-carrier’s Extended Range 5G covers nearly everyone in the country 315 million people across 1.8 million square miles. 225 million people nationwide are covered with Ultra Capacity 5G, and T-Mobile expects to cover 260 million in 2022 and 300 million next year. All that capacity means T-Mobile has first responders covered from large cities to rural towns.

Connecting Heroes is part of T-Mobile’s 10-year commitment to provide free service and 5G access to first responders all public and non-profit state and local fire, police and EMS departments, and emergency call centres including 911 (PSAPs/ECCs) potentially saving them up to $7 billion (€6.88 billion). Since the launch two years ago, first responder agencies and departments around the country have enjoyed the benefits of wireless plans with priority access and preemption, free 5G smartphone service with unlimited data and more 5G smartphones and rugged devices to choose from than ever. Last fall the Un-carrier announced a partnership with Visual Labs so first responders can turn a smartphone into an all-in-one body cam and communications solution. Plus, T-Mobile offers a discount for individual first responders and their families Magenta First Responder with 50% off family lines compared to Magenta.

For more information on the evolution of Connecting Heroes, visit here. To enroll in WPS for both voice and data lines.