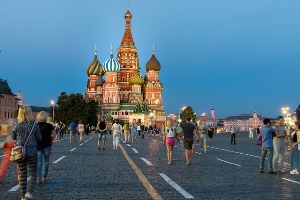 Mobile network operator MegaFon has demonstrated a functioning 5G based station at a site in Moscow-City, where it hosted a Dota2 cybersport tournament using 5G and Cloud Gaming technologies.

“5G opens up new opportunities in all sorts of areas for the citizens of Moscow. MegaFon and its partners have demonstrated the dramatic changes the fifth-generation network will bring to Cloud Gaming. There is now no need to buy the most powerful computer to use heavy content online.

This concerns not only games, but also virtual tours and educational programmes. In the near future we will see 5G technologies changing the driverless transport sector, telemedicine and AR/VR, and our homes and cities will get “smarter”. We are supporting and facilitating the opening of pilot zones because they enable the market to test specific services, resulting in a high and secure standard of service for citizens and the creation of technology companies with highly-paid jobs,” said Alexander Gorbatko, deputy head of Moscow’s Department of Information Technology.

The Dota2 tournament involving participants from Winstrike Team – one of the strongest teams in Russia – was held during the broadcast of The International 2019 super tournament, for which MegaFon combined Huawei 5G hardware with Cloud Gaming technologies from Russia’s Loudplay platform into a single ecosystem.

Spokesmen for the mobile operator stress that the synergies from these new technologies help to resolve the main problem faced by gamers around the world: it is no longer necessary to have a powerful computer with a wire or Wi-Fi connection to the internet. 5G internet speeds combined with the opportunities offered by cloud technologies make it is possible to play online games using easily affordable computers with an ordinary smartphone as a modem.

By the end of 2019, Russia’s Big Four operators will deploy permanent 5G pilot segments around priority areas: Tverskaya Street, Sparrow Hills, VDNKh, and the Skolkovo Innovation Centre. By decision of the State Commission on Radio Frequencies, each operator will have both a main zone and an additional zone. For MegaFon, for example, the Moscow-City site is its additional zone, while it plans to launch its main 5G pilot zone – in Sparrow Hills – in early September.

During testing in the real city environment, the operators will fine-tune scenarios of interaction between 5G and earlier-generation networks, while also studying their functionality and accessible services. In addition, a 5G demo centre will be opened in Moscow to trial promising new technologies and city services using the new communication standard. Businesses will have the opportunity to test new technologies at this site to assess the potential benefits of commercial implementation.