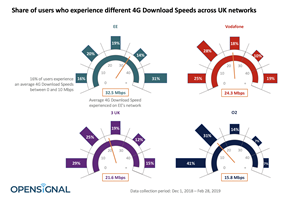 In Opensignal’s latest U.K. national report they observed that users experienced widely different 4G Download Speeds on the four major mobile networks. EE led the group with a 4G Download Speed of 32.5 Mbps, more than 8 Mbps ahead of Vodafone (24.3 Mbps), 11 Mbps ahead of 3 (21.6 Mbps) and double the speed of O2 (15.8 Mbps). But why does users’ experience vary so much across the U.K.’s operators?

Opensignal’s data suggests that the four U.K. mobile operators adopted different 4G network deployment strategies, and that spectrum holdings are a key factor in determining users’ mobile experience. We analysed the distribution of our users’ average 4G Download Speeds across U.K. networks and found that they roughly mirrored the distribution of spectrum bands which we see operators using. Higher percentages of smartphone users experience faster speeds on those networks that have a greater percentage of cells transmitting data on higher frequency bands — which on average offer faster speeds. 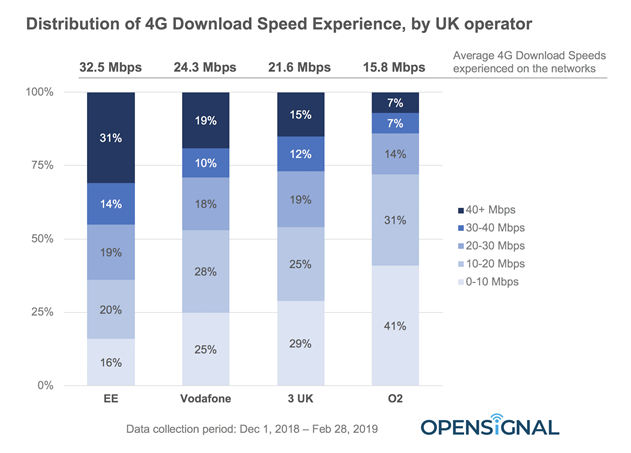 Opensignal investigated the distribution of our users’ average 4G Download Speeds and found that O2 had the greatest proportion of users experiencing slower speeds. 41% of O2’s users on average experienced 4G Download Speeds lower than 10 Mbps, compared with 29% of 3’s, 25% of Vodafone’s, and 16% of EE’s users.

On the other hand, EE was the only operator with the majority of users enjoying speeds faster than 20 Mbps: three out of ten users experienced more than 40 Mbps in 4G Download Speeds, with another third of users averaging between 20 Mbps and 40 Mbps. Vodafone and 3 had 47% and 46% respectively of users experiencing 4G Download Speeds faster than 20 Mbps, while only 28% of O2 users enjoyed those higher speeds.

Among many factors that influence users’ mobile download speeds, operator spectrum holdings play a key role in explaining the disparate range of experiences we measured across the U.K.’s networks. 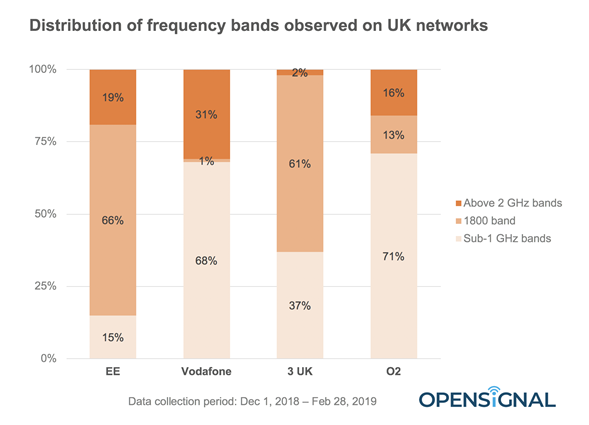 Opensignal analysed the 4G mobile network infrastructure which our users connected to and measured the proportion of cells that utilise different frequency bands across U.K. mobile operators. We found that operators exhibit different proportions of cells utilising various bands, suggesting their 4G deployment strategies were shaped by their respective spectrum holdings.

O2 was the U.K. operator that displayed the highest proportion of 4G cells utilising sub-1 GHz bands in our measurements, with 7 out of every 10 cells transmitting data on the 800 MHz band. This extensive deployment of lower-frequency bands was reflected in our national results: O2 scored the second-best in 4G Availability among the four operators but lagged behind in our speed metrics — a result consistent with the features of sub-1 GHz bands.

Two-thirds of the cells our users connected to while on Vodafone’s 4G network utilised the 800 MHz band, which can explain why Vodafone’s 4G Availability score was very similar to O2’s. However, almost all of Vodafone’s remaining LTE cells transmitted data on the higher capacity frequency bands — 2100 MHz and 2600 MHz bands —, likely the reason why 29% of our users on Vodafone’s network were able to experience more than 30 Mbps 4G Download Speeds.

As 3 only recently started re-farming the 2100 MHz 3G band for 4G, the operator presented the lowest percentage of 4G cells utilising frequency bands above 2 GHz in our measurements. However, 3 had three-fifths of the LTE cells connecting our users to the 1800 MHz band, which in turn offers improved capacity compared to sub-1 GHz bands. The remaining 37% of 3’s 4G cells we saw operated on the 800 MHz band.

This lower proportion of our users on 3’s network connecting to sub-1 GHz spectrum compared to O2 and Vodafone likely explain why the operator came last in our 4G Availability scores. It also suggests that when our users connected to 4G networks they were more likely to connect to higher frequency bands — which helps explain why 3’s users enjoyed faster download speeds than O2’s.

EE displayed the lowest proportion of 4G cells using sub-1 GHz frequency bands in our tests, but the greatest proportion of LTE cells transmitting on the 1800 MHz band. And yet, EE dominated our 4G Availability table, with a 5-percentage-point lead on its closest rival, suggesting that EE’s users on average experienced faster 4G Download Speeds because the operator deployed a denser network of high-capacity cells.

With operators now infusing new spectrum in their mobile networks in preparation for the 5G launches coming later this year, download speeds will likely see improvements in the coming months.

However, our data also suggests that the disparity in our users’ experiences will likely increase. We see that only a limited proportion of cells across U.K. networks use higher frequency bands, and accordingly, only a small percentage of our users were able to enjoy high 4G download speeds.

Unless mobile operators extensively activate higher frequency bands across their networks, only a portion of their users will benefit from the new spectrum deployments in the 2.3 GHz and 3.5 GHz bands. And their users who can only connect to lower-frequency bands will continue to suffer from single-digit 4G Download Speeds.