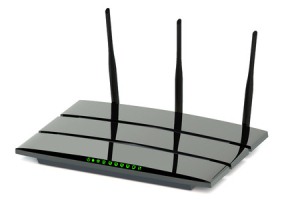 If your tech start-up needs excellent 4G connectivity around the clock, it’s probably best you set up base in Amsterdam, Stockholm, Zurich, or Tallinn, says Andrea Toth. Yes, Tallinn: the city that nurtured Skype and Transferwise, came out as one of the top cities in our measurements if you’re looking for excellent LTE availabilityand fast speeds. Here, OpenSignal takes a peek at how Europe’s 13 most bustling tech hubs fare in the LTE race.

The past decade has seen tech hubs springing up like mushrooms across the world, be it in the U.S., Asia or Europe. But becoming a tech hub doesn’t come easy. Cities need to attract top talent, foster an open and welcoming culture, and most importantly, they need to draw in capital. Bringing together groundbreaking ideas and the people who can make them happen requires excellent connectivity. Whether it’s city-wide Wi-Fi or reliable, fast 4G, we believe digital connectivity for tech hubs is so much more than just a vanity metric.

For the current analysis we’ve gathered data over a 90 day period starting 1 December 2017 through February 2018. Let’s start with LTE download speeds. Just as we saw in our recent blog post on the state of LTE in Europe, the Netherlands came out first in our current analysis as well, with Amsterdam being the only city on our list to crack the 40 Mbps 4G speed milestone.

That’s over twice as fast as the global average of 16.9 Mbps that we recorded in our latest report analysing LTE availability and speeds in 88 countries. The Dutch hub was followed by Stockholm and Zurich, with both cities offering average LTE speeds above 37 Mbps. 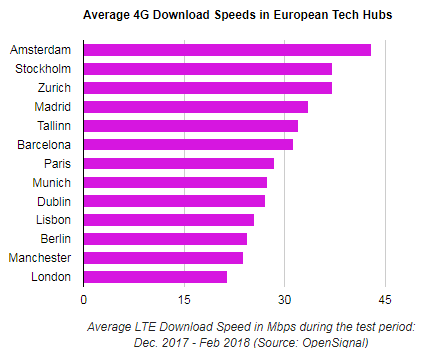 But 4G speeds don’t mean much, if you don’t get to use them. That’s where our LTE availability metric comes in, measuring 4G user experience based on the percentage of time users can connect to an LTE signal. Of the cities we measured, all but one (Dublin) were able to provide an LTE signal 75% of the time.

Which is expected of European tech hubs, but still falls short of what the top two cities offered: our measurements showed mobile users in  Amsterdam and Stockholm were able to get an LTE connection at least 90% of the time. Among the top three, we also find one of the smallest cities on our list: Tallinn. Users in Estonia’s capital not only enjoy remarkable 4G availability just short of 90%, but also average speeds of 32 Mbps, faster than big-shots such as London, Paris or Berlin. 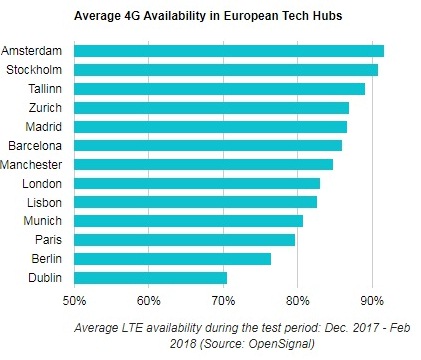 In order to grow, tech hubs need first-class connectivity with reliable 4G access and super-fast speeds. In this regard, the top tech cities in Europe seem to be on the right track. But the rest of the world isn’t standing still either, and we’re seeing more and more cities emerge across North America and Asia offering all the right features of a tech hub.

Whether it’s through various incentive schemes or partnerships, Europe’s cities will need to continue developing their 4G reach and speeds if they wish to remain among the best connected (and most attractive) tech hubs they are today.

The author of this blog is Andrea Toth of OpenSignal