What the future holds for telcos — Part 1: The scale of the problem 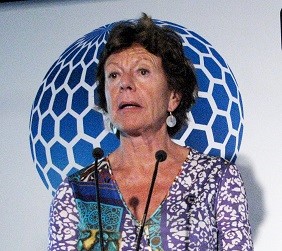 The broadside salvo of shots aimed at network operators last week by Neelie Kroes, the European Commission’s departing vice-president for the Digital Agenda certainly grabbed some headlines. And with good reason, the operator failings she highlighted again (for one last time) have still not been widely addressed, as Jeremy Cowan reports.

It’s been a regular question in the industry in recent years, ‘When will telcos transform themselves?’ People inside and outside the network operators want to know what, if any, their future role will be?

On October 1 Neelie Kroes (pictured below) told a meeting of Brussels-based ETNO, the European Telecom Network Operators’ Association, what they could expect in telecoms in the coming years. “Today, all EU homes have broadband coverage; 76% have a connection; almost half can access it on their mobile. They are demanding greater and greater bandwidth, faster and faster speeds, and are prepared to pay for it. But how many of them would do that, if there were no OTT services? If there were no Facebook, no YouTube, no Netflix, no Spotify? In fact, OTT players are the ones driving digital demand – demand for your services!” she said. “That is something you can work with, not against.”

“There is a demand for investment in broadband capacity and, of course, that has to be paid for. But customers cannot be forced to subsidise specialised services they do not use, and those specialised services cannot be allowed to slow down access to the open internet. Today’s European market is fragmented, ring-fenced, and subscale. I know many others today have made that point. My dream is to change that. To see equally open and unified markets on both sides of the Atlantic,” Kroes added.

Commenting on her remarks, 451 Research vice-president, Declan Lonergan said: “Kroes is obviously not one to go gently into that good night. During her time in charge of the EU’s Digital Agenda, Kroes has been willing to pick a few fights with the region’s telecommunications operators. It’s not surprising that her parting words are also aimed squarely in that direction.

“Kroes’ general philosophy has been centred on the achievement of greater harmonisation in telecom policies and services across the EU (European Union). She can’t really be blamed for highlighting the issue of roaming charges, and also for pushing toward a single telecom market. It would be surprising if any representative of the EU Commission wasn’t interested in exploring the single market issue,” Lonergan noted.

“Overall, Kroes has done OK in her position. She’s been passionate, vocal and – though the network operators would no doubt disagree – pretty brave in taking on some serious vested interests,” said Lonergan. “Now it’s over to her successor to continue to push the digital agenda.” Is this a European problem?

Infonetics Research of Campbell, CA, reported in June 2G, 3G, LTE Mobile Services and Subscribers that mobile operators worldwide earned US$800 billion in 2013 from mobile services — including mobile voice, SMS/MMS, and broadband. This was, however, an increase of just 1% from the year before. When Infonetics looked closer they found a very mixed picture, with significant growth in Asia-Pacific (+5%), the Caribbean and Latin America (+4%), and North America (+3%). Set against this was a high single-digit decline in EMEA (Europe, Middle East & Africa). Stéphane Téral, principal analyst for mobile infrastructure and carrier economics at Infonetics Research, commented: “Europe dragged global mobile service revenue again in 2013, plagued by mobile saturation and weak consumer spending across the board – even in Germany, the Euro zone’s largest economy – and fierce price-based competition in markets including Belgium, France, Italy, Spain, and The Netherlands.”

“The CEOs of Europe’s Big 5 – Deutsche Telekom, Orange, Telecom Italia, Telefónica and Vodafone – are pushing the European Commission for more consolidation to reduce the number of operators in each country, from four or five to just three. The hope is this will restore operators’ revenue growth and margins, similar to what we saw in Austria, Téral added.

According to Pamela McGill, a senior vice-president in the Telecommunications division of US analyst firm Market Strategies International (MSI): “Last year, T-Mobile (USA) disrupted the industry’s status quo with the launch of its ‘Uncarrier’ initiative whereby it vowed to change the way that customers purchase mobile telecommunications devices and services. (See: T-Mobile USA CEO Legere comes out swinging in response to FCC ‘bogus charge’ claims. )  Now we see that 2014 has brought a dramatic shift in the way that the wider industry is marketing and selling to its customers. An all-out price war has ensued, the likes of which have not been seen since the historic cola wars of the 1980s. New headlines appear almost daily touting the latest offer from carriers, each trying to outdo the other with promises of the best plans, best rates and best phones.”

“As carriers continue cutting prices and offering more bandwidth, the industry is becoming more commoditised. It is increasingly difficult for wireless carriers to truly differentiate themselves in this highly competitive world.” (See MSI’s Carrier Wars report.)

Are carriers in a race to the bottom?

Why, you may ask, are carriers engaging in a price war, when what they need to do most is differentiate themselves by offering new services that customers say they want and which will rebuild their margins? They clearly aren’t listening to the advice that’s being given.

Infonetics Research has already shown that, despite the rise of mobile data, ARPU (average revenue per user) continues to fall or remain flat everywhere except China. However, mobile broadband revenue is forecast by Infonetics to grow at an 11.8% compound annual growth rate (CAGR) from 2013 to 2018.

A poll of 100 North American communication service providers in April, carried out for business support system (BSS) vendor, CSG International showed that 62% of the telco and cable operator respondents expected growth to come through digital content delivery for business services. Only last week VanillaPlus reported that Kent Steffen, president of CSG Content Direct, was one of a number of speakers who discussed the many areas of potential growth for telcos; in OTT video, digital content, financial services, mobile advertising, security & cloud services, M2M (machine-to-machine communications), and mobile commerce (See: Urgent advice for ‘flatlining’ CSPs that need to transform their telco business)

So, instead of looking to stifle competition, the telcos might find quicker and greater success if they concentrated on what they themselves could do better. In some areas, including security, cloud services and M2M, no one is better placed than the telcos to launch these new services – for now!

In Friday’s Part 2 of ‘What does the future hold for Telcos?’ Jeremy Cowan
looks at the recommended actions for telco survival and prosperity