Operators must join the content-led eco-system 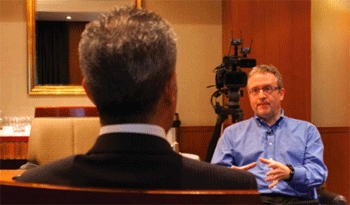 In every market there is a finite number of customers. So sooner or later every operator has to switch from a focus on customer acquisition to a focus on optimising services and profitability. With this in mind, VanillaPlus has been talking to Ramez Younan, the CEO of Orga Systems. He holds degrees in Engineering, Management and Business Administration and, in his previous post, spent time developing Oracle’s telecoms strategy. Born in Egypt, he speaks four languages and now lives with his family in Germany.

VanillaPlus: Ramez, where do you think the greatest opportunities for growth in communications services lie; in consumer-led content delivery or in enterprise-led fixed and mobile applications?

Ramez Younan: In the 1990s it was very easy for operators to grow through local market penetration and then in the early 2000s they went into mergers and acquisitions so that they could again grow their subscriber base, across borders. In some cases they found economies of scale or got access to roaming revenues. But these trends are practically over, apart from some acquisitions in Africa. But that leaves now the number of subscribers that need to be acquired beyond 4.6 billion out of 5.5 billion worldwide. To achieve these revenues and associated growth in margin, there are three areas that operators need to focus on.

One is to capitalise on the huge increase in data services without increasing the network cost. Second is the ability to identify their customers, and to provide one-to-one rather than mass offerings.  And most importantly and strategically, how can they lead and drive other industries to get on to the machine-to-machine platform, rather than wait for each industry to define its path for itself?

VP: Real-time charging and policy control are often simply seen as a means of managing bandwidth, which can have negative implications for customer care. But Orga Systems describes these together as ‘a key enabler’. Can you expand on this?

RY: In the past it was seen as a (source of) dissatisfaction for the customer because you’re decreasing the bandwidth for one customer and increasing for another. The reality is that, in a couple of years’ time, the network costs will not be able to pay for the revenues coming from the data. Here’s the challenge that the operators have to do something about; they cannot continuously increase their network costs. So, they will have to differentiate the type of service or SLA for specific customers at a specific time. That is inevitable. The way to do it is not just to reduce the speed for a specific customer and provide it to another business customer without the ability for that affected customer to increase their speed.

Where Orga Systems comes in is that we provide an integrated solution where you’re able to enforce the quality and speed of service through the network to a specific customer based on the tariff. But also we give the ‘hard-done-by’ customers, the ability to have online charging in real time, so if they wish to download a movie or YouTubeclip, not at the expense of the high end customers, then they can top-up online immediately on the mobile. Then they would get immediate access to that bandwidth again.

That integration between the network and IT is something unique that Orga Systems provides.

VP: How can operators break out of the flat-rate pricing cycle, tying them to low revenues and rising costs, and what role can subscriber management play?

RY: I think the operators have led themselves into this. Nobody really asked them for a flat rate. But I think it’s more of the way they see themselves as providers of a pipe, a link to the network. I think that’s why this pricing became the most efficient; one, because they might not be able to calculate how much usage a person has, also because they have silos between post-paid and pre-paid.

So, to move away from that you have to first identify your customers, you have to know which customer uses which service and at what rate. Also operators have been planning their future on the historical data that we have, which is not very accurate because now we have a new generation of subscribers – not like you or me with grey hair – they have been born with the internet, the mobile and Xbox. Their interaction with the device is much, much higher.

Therefore (operators) need to do three things: One is put all their subscribers on one platformwhere they can measure what these customers need; number two is to develop a one-to-one relationship with the customer based on online, real-time offerings like Amazon who see the customers’ preferences; third is to go to those companies at the end of the pipe like Google, Apple, Microsoft,and Facebook,whose business model relies on that pipe and forge a partnership with them.

Say, “Guys, you’re draining my pipe. I need help otherwise I’m not able to provide these speeds that your innovations require day by day.” These are the things that are extremely important for operators, to come out of the pipe and start to be part of the eco-system with the content-led services.

VP: Service providers in mature markets need to be able to upscale to handle billing for up to 100 million subscribers. How are they responding, and what are you doing to support them?

RY: Back in the 1990s operators decided to split their customers by how they pay – post-paid and pre-paid – for all sorts of good reasons at the time. Since then they have developed two parallel siloed systems. But to be able to grow you have to know your customers, so they need to combine those two on one platform, from a cost perspective, but also from customer care and revenue potential.

Combining those two poses that question of scalability, and that comes with a caveat. The systems that were able to run post-paid only were for a small population – 10-15 million subscribers. So the architecture built for that volume was not very robust – or is still not very robust in most cases. It may be rich in functionality but incapable of handling 100 million subscribers.

VP: Another hurdle for CSPs is achieving the flexibility to manage smart metering, and for billing and charging systems to interplay with different industries. How are you responding?

RY: At Orga Systems, from a product point of view, we are ready for any of those industries because our architecture is based on events, multiplied by the number of use cases, multiplied by the number of tariffs. It’s unlimited. Add to it our scalability; it can scale to tens and hundreds of millions. The key thing here is the ability to provide the right process and business model for the design of that system. This is where the challenge actually is, Jeremy.

The telecom industry has experience already that other industries don’t have yet. Smart meters have been expensive in the past, and that was a good excuse for utility operators and CSPs to have that conversation over who does
what. But now that the cost has come down, mobile operators are not identifying themselves as real outsourcers of (smart metering), but are perhaps only interested in traffic. So I don’t think it’s only smart metering, it’s what happens after that smart meter. When that piece of data comes out of that smart meter, who does it go to? Does it go to the mobile operator to process, or does it go to the utility operator who will build an entire infrastructure to bill and monitor it?

That complexity of business model has to be handled by both mobile operators and utility operators. We sit with both of them in a Round Table and we try to facilitate that discussion. From all the discussions we’ve seen, I think they need an incentive to be pushed in that direction. That can only happen from government assistance by giving them financial credits or taxation incentives, so that they can both lead that innovation for the benefit of the consumer.

Operators must join the content-led eco-system