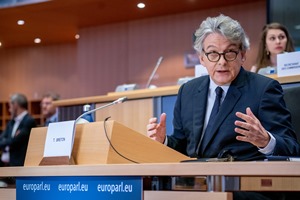 The European Commission has kicked the possibility of US big tech paying towards next generation networks into the long grass, it seems, when it initially suggested it could act on the issue this autumn. Business technology journalist Antony Savvas looks at the possible fall-out from the inaction.

European Commissioner Thierry Breton, the former boss at technology services firm Atos, says the organisation will launch a consultation into the issue during the first quarter of next year, with the process set to take another half a year. That could take us up to a year from now, with no real idea of when any recommendations or orders would be enacted, if there are any?

This is despite arguments around big tech’s lack of direct investment in mobile and fibre networks around Europe taking place for the last ten years.

Half the world’s traffic

Only this May, ETNO, the European telcos’ lobbying body, claimed in a report that more than half of the world’s network traffic is attributable to just six firms: Google, Facebook/Meta, Netflix, Apple, Amazon and Microsoft.

These firms have argued back that the introduction of any new financial contribution, or tax, would challenge the principle of “net neutrality”. Such neutrality is the principle that service providers should enable access to all content and applications regardless of where they come from.

It is mainly US telcos in the past that have suggested that some content providers should get a smoother ride on their network if they pay towards access, with the inference that others that don’t pay will see their content “throttled” to enable the payers. I’m not aware of similar suggestions from European telcos?

Anyhow, US big tech doesn’t usually go out of its way to stick up for the little person. It either normally does what it wants within the set rules and laws of the land. Or it skirts very close to the lines of those rules or laws, or occasionally goes over them, and then deals with the consequences after. This includes not paying any fines levied against it for years after, after dragging regulators into legal quagmires with the best lawyers money can buy.

Some lobbying organisations, which usually campaign around issues such as data privacy and digital equality, have also dragged themselves into the net neutrality argument. They seem to think that big tech being forced to pay towards core communications infrastructure will mean they will get beneficial treatment from it, or maybe even too much control over it?

No, that wouldn’t be the case, if any new rules or laws clearly prevent that. Such payments should simply be a regular tax, and not a formal investment. It should be based on their network data usage, and how existing networks and the ones being built right now, to support 5G, and yes, 6G, along with edge applications and the Internet of Things, have supported and will support big tech going forward.

Some industry analysts have also questioned the quality of data being used by ETNO to justify the traffic claims of the telcos. They say it is not “granular enough” to show, for instance, what data is being accessed over whose networks, how it is being accessed, and why.

That may well be the case, but no one is really disputing the fact that the big content providers are generating the most data. It will be important for the telcos to get their arguments copper tight if any real progress on a big tech network tax ever comes to fruition. Not least because, if they don’t, there will be a US legal eagle waiting in the wings to stall things.

That said, without doubt, European telcos are getting closer to sections of big tech through making alliances to deliver and manage new services. This includes using the national data centre regions of Google, Microsoft and Amazon to deliver country-specific services to businesses, and addressing data sovereignty demands among those enterprises. It also includes such big tech firm launching their own services and using the telcos to reach customers quicker at the telco edge, instead of relying on their own distant data centres.

With this evolving scenario it would be no surprise whatsoever to see big tech go for the whole shebang, and buy their own telcos to cut out the middleman to reach their customers direct.

Action at the edge

IBM and Bharti Airtel are working together to deploy Airtel’s edge computing platform across India, which will include the use of 120 network data centres across 20 cities.

Once deployed, the platform, powered by a suite of IBM software and services, is designed to enable large enterprises across multiple industries, including manufacturing and the automotive sector, to “accelerate innovative solutions” at the edge, using low latency and more secure connectivity.

“As India gears up to experience 5G we see a massive opportunity to help businesses across industries transform how they deliver goods and services,” says Ganesh Lakshminarayanan, CEO for enterprise at Airtel Business. “We have the largest network of edge data centres available in India and we will leverage our work with IBM to help businesses address their critical business needs with greater efficiency.”

India, with its huge population, could well be the key use case and driver for mass-scale 5G business deployments across global industries and companies.

US-based Viasat and UK-headquartered Inmarsat have been given UK government approval to combine their businesses under the UK National Security & Investment Act.

Despite the sensitive deal covering a finite resource when it comes satellite capacity, the UK government deemed the transaction does not pose a risk to the UK’s national security.

The European Commission is still looking at the deal, after being asked to by European satellite connectivity providers, fearful that they could be squeezed out of any new network capacity being planned by Viasat and Inmarsat.