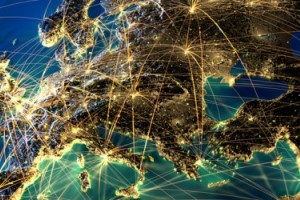 It’s been a busy week on the fibre roll-out front with various telcos stepping up their efforts to improve and widen services for businesses and consumers. Business technology journalist, Antony Savvas takes a close look at the new developments.

Vodafone is reportedly discussing a joint venture (JV) with investment firms to extend its fibre-to-the-home (FTTH) footprint in Germany. An article in German newspaper Handelsblatt says Vodafone is considering an investment of up to €10 billion in the JV.

The move under consideration comes after Vodafone CEO, Nick Read has previously said he is open to JVs to meet demand in growing markets, including in Germany. A partnership with Deutsche Glasfaser already allows Vodafone Germany to lease and operate that company’s FTTH networks.

Running its own networks to meet high-speed fibre demand, however, is more attractive to Vodafone, as it allows it to increase profitability. It’s one reason why Vodafone in the UK is in the frame for a potential £3 billion (€3.62 billion) acquisition of TalkTalk, which is building its own “full-fibre” network to serve the needs of companies and consumers in major UK cities. As we reported earlier this month, Sky is also said to be looking at buying TalkTalk, for exactly the same reason.

Rival operators to Vodafone in Germany have already established fibre JVs. In 2020, Telefonica Deutschland (O2) formed the Unsere Grune Glasfaser (UGG) fibre JV with the Allianz insurance group. And Deutsche Telekom, which is investing in its own FTTH network, recently formed the GlasfaserPlus venture with Australia’s IFM Investors.

In fact, Deutsche Telekom has just increased its target for connecting German homes to fibre networks through GlasfaserPlus, to “well over” the previous 10 million homes, without naming the new figure it aspires to.

The new fibre action isn’t just in Germany either. UK full-fibre service provider Hyperoptic, which up to now has mainly focused on the London market, has announced it is investing £200 million (€241.3 million) to “accelerate” its services to homes and businesses.

Hyperoptic’s network currently passes more than 825,000 homes and firms, and already serves over 230,000 customers. Throughout this year, said the company, it will lay more than 1,500km of fibre to connect an additional 400,000 homes and businesses in different parts of London, and elsewhere.

As well as London, Hyperoptic has existing customers in cities such as Manchester and Edinburgh, and has plans to also connect new customers in the likes of Liverpool and Glasgow.

As full-fibre is delivered more widely across global markets, it will have to come with greater service assurance from those helping to provide the capacity, so it is welcome news that a key player like Openreach is helping to show the way forward.

Openreach, a standalone unit from BT, still provides the main backbone infrastructure for the majority of fibre services delivered by third party providers in the UK, and it is moving to improve its network reliability and customer experience.

It has just signed a deal with US testing and monitoring company VIAVI Solutions to automate its full-fibre network testing, using VIAVI’s Fusion platform. This technology will effectively deliver an on-demand network “speedometer”, said the partners, showing “near real-time” views of the speeds that end users can achieve.

This will be the first time that proactive network testing of end user speeds has been deployed in fibre access networks across the UK, independent of the customer’s internet connection, said the partners.

Diagnostics and contact centre procedures will be automated for any issues raised by Openreach’s communications service provider (CSP) customers. Openreach and VIAVI promise to equip operators with “fast” test results for “rapid” pass/fail interpretation. “This allows troubleshooting to be focused on the root cause, whether inside the Openreach network, or at the CSP,” they said.

A key element of Fusion is its small form-factor pluggable (SFP) capability, enabling micro-probes to be plugged into thousands of nodes across the country. These probes enable automated throughput testing from all CSPs ingress points to end-user premises, supporting 1G and 10G line rates across a variety of standards.

CSPs can realise IT cost savings of around 25% over a five-year period by adopting telecom services delivered through a software-as-a-service (SaaS) model, according to just published research.

Analysys Mason conducted the research on behalf of Nokia, with the consulting firm saying that market perceptions exist of telecom SaaS services having higher longer-term costs due to recurring monthly subscriptions. But it said those perceptions did not typically take into account the full extent of potential benefits using SaaS services, including lower initial investment and always having the latest software and technology.

In the case of the on-premise model, it added, CSPs often have to buy data centre resources every five years or so, and use IT consultants regularly to manage their elaborate IT environments.

“Care, therefore, should be taken to compare not just the licensing costs for various deployments, but also the costs associated with end-of-life upgrades, staffing and maintenance, in order to understand the full range of cost savings that can be achieved by using a SaaS-based deployment,” Analysys Mason says.

CSP spending on SaaS has increased in recent years, accounting for 5% of CSPs’ operational expenditure in 2019, according to Analysys Mason. It says this is expected to rise to 11% by 2023, as CSPs continue to execute on digital transformation projects.

With overall margins getting tighter for telcos, despite the advent of 5G, telcos should consider the report seriously.