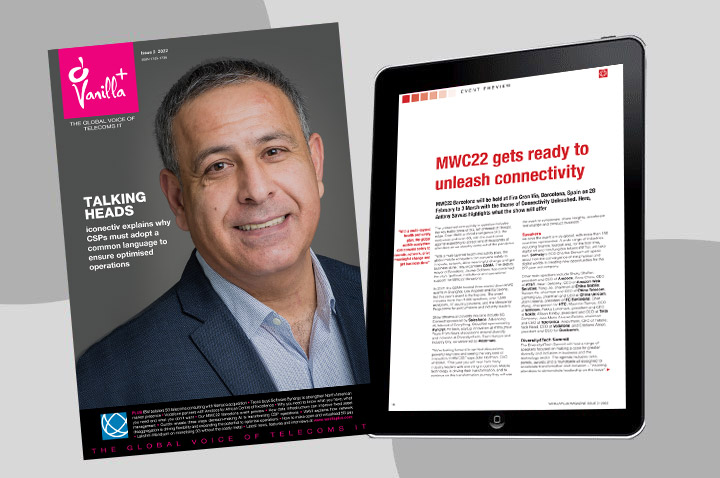 iconectiv estimates that CSPs have been losing up to 20% of their annual capital expenditure – to the tune of US$65 billion industry-wide – because of poor communication, mislaid assets and mismanaged inventory. In this issue, Eyad Alqadi and John Hayes tell George Malim why it’s so important that CSPs adopt a common language to ensure operations can be optimised.

I’m expecting a retro-vibe at MWC22 Barcelona. I haven’t been to the event since 2019 as the pandemic scuppered mine, and about 100,000 other people’s attempts to attend in 2020, and two years is a long time in telecoms. 5G has gone from something talked about as years away to an altogether more immediate prospect. It seems the world’s telecoms engineers made the most of their key worker status to get out and install relatively large volumes of radio equipment and 5G has accelerated as a result.

This is to be celebrated but it leaves MWC22 scrabbling to re-establish itself as a focal point for the industry. Thinking back to past glories, while acknowledging there’s no prospect of attendee numbers in the six-figures, has caused me to consider what a show like this should be. Certainly, I’ve always categorised myself as an attendee that believes more value is created by what you don’t see than what is right in front of you.

It isn’t who has the largest stand, the flashiest entertainment, the most famous rented celebrity or even the best on-stand catering – thanks, Ericsson. It’s the meetings behind closed doors, the chance links that are made at social events and the chance to re-ignite old associations that really drive business value.

For so long, the expectation has been that all in the industry should attend so to find a situation in which everyone has a perfect excuse not to, really tests the worth of the event. The days of having to attend because it looks bad not to are over but still tens of thousands are flocking to Barcelona. That speaks volumes for both the goodwill towards MWC people have and the value it is still expected to provide.

This year, there will be fewer people in evidence but a significant portion of those who make it – including me – will simply be pleased to be there. I’ll probably still swerve the tortilla sandwiches but there will be other memory-jogging aspects that will give this year’s event a retrospective flavour. As an Englishman, I’ll be reintroduced to the thrill of navigating international roaming charges because the UK has left the EU.

I’ll also pass a personal cellular milestone. 3G, the first cellular generation that I have covered from its start, is beginning to be retired. Vodafone UK and others have already announced plans to retire the technology to free up spectrum for 4G and 5G so it’s only a matter of time before 3G is consigned to history.

Although MWC has had to sit on the sidelines of the pandemic, the industry has continued to progress and that’s something that should be celebrated at MWC22.