Career snapshot: Identify your ‘rock, pebbles and sand in a jar’ and you’ll create a good work-life balance 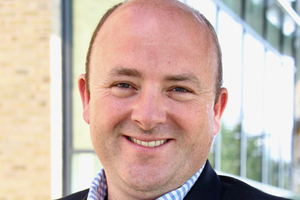 From student portals to mobile internet access, Matthew Tate, chief operations officer (COO) of Wireless Logic has learned from great mentors (and in one case, the worst example at the same time) to find that cost management matters, and the “Rock, pebbles and sand in a jar” parable is one to live by, especially to maintain a good work and life balance!

After attempting to start an online student portal straight after leaving university the four months of research suggested it wasn’t viable my first official or ‘paid’ job was as technical support at an online laptop and mobile services web shop called TotallyPortable.com. At a basic level, I was responsible for database management and the web design of the shopfront.

I have always been interested in the IT world. My degree of Informatics joint Computer Science and Artificial Intelligence covered many topics of systems and how to deliver them efficiently, but the area that fascinated me most, was accessing them anywhere. I was actually one of the first of my peers to get a mobile phone. I always remember showing off my first BlackBerry at the pub and one friend saying, “why would I want to get my email out of the office?” A good point, but it made me realise that the key component in the mobile internet was the ‘mobile’ part. In fact, I could also see at that time that the mobile access sales at TotallyPortable was the fastest growth area. Which, ironically, is the market that Wireless Logic now leads!

VanillaPlus: Without naming and shaming, tell us about your worst ever boss

I had a great and worst boss. They were incredibly knowledgeable about the field we were working in but were a terrible ‘people-person’. So, I was stuck in a position where I wanted to learn their knowledge but had to find a way to squeeze it out of them as it wasn’t shared freely. At the same time, I was being constantly shamed and degraded for either not knowing what they knew bearing in mind that they had 20 years more experience than I did or approaching tasks the way they would, which in my opinion was typically the wrong one.

In the end we did find a symbiotic state where they would be able to use their experience and apply their knowledge to help the business, whilst I would take on the human interaction (usually after they had broken things and I could sweep in with a smile and fix them). We ended up being rather successful and delivered a lot of change for the good, but I still wonder if for them it was a conscious approach, or I had made it easier for them to pick the parts of work they enjoyed being more knowledgeable than all those around them!

At BlackBerry I managed three teams, in Singapore, Slough, UK and Toronto, Canada and had to deliver an annual performance review and set up meetings with each team within a two-week timeframe. I was proudly telling my OD (Organisational Development) manager how I was going to be on time. At which point, they told me that it had to be face-to-face which was an entirely new policy. After a number of heated discussions in which I explained the ‘logistical’ challenges of this and what should have been the commonsense approach, I got on a plane.

Over five days I travelled from Toronto to Hong Kong to Singapore, before catching the last flight out before landing in Heathrow the following morning. Reviews in Slough, dinner with the wife, who was finishing her medical degree in the UK, then caught the 5.00am to Toronto. I made it to the office by 10.00am and completed the reviews. To this day, I can’t remember the last Canadian reviews, but seeing where the people are working now, they can’t have been too bad. And some say cost management at BlackBerry was one of its downfalls!

Manage your work and life priorities well. What I mean by that is focus and manage the really important ones. I can think of so many work tasks or personal quandaries that seemed to be the ‘most important’ at the time that seem so irrelevant now. In learning the “Rock, pebbles and sand in a jar” parable, work out which are your rocks and make sure they are taken care of. Then you have time for the pebbles, and then you can pick and choose the sand.

Have a good work and life balance! It took me a long time to find out how to approach this well, and then during lockdown I really struggled. I used to say two things as I handed over their first BlackBerry to new employees. One, you will email yourself in the first two weeks to check the device is working. Two, you are not expected to reply outside of office hours, and if you do it once, you will be expected to be on call for ever. I can’t think of one person who didn’t fail at both.

The other story anyone who has worked with me has heard me tell a thousand times is the ‘five monkeys in a cage’ and University experiment from 1966. The key lesson is to continually challenge everything, especially the status quo. Like anyone, my younger self would probably ignore me because naturally, he knows best. Even now, I don’t listen to this advice all the time.