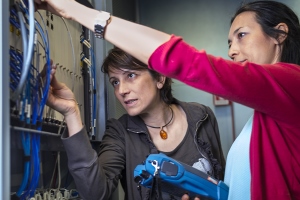 It’s been a case of swings and roundabouts of good and positive news for some of the main players in the telco space at the beginning of the year. Business technology journalist, Antony Savvas takes a look at some key developments.

Telefónica has announced an agreement with Spanish unions to cut its workforce by around 2,700 people in the country, with a voluntary redundancy plan aimed at employees who turn 55 or over this year, and who have been at the company for at least 15 years.

Telefónica says the job cuts will cost around €1.5 billion, but that they will deliver estimated annual cost savings of more than €230 million from 2023. The company says the move is part of its effort to become a “more agile and competitive” company.

“The impact on cash generation will be positive from 2022, as well as capture savings, as the departure of employees takes place during the first quarter of 2022,” said Telefónica.

The firm is Europe’s third-largest telco and employed over 28,000 in Spain in 2020, which was about a quarter of its total global headcount of around 114,000.

With Telefónica concentrating on making cuts among its “old hands” to generate bigger savings, from presumably higher salaries, competitors will be looking to see whether it takes many of these staff back on, as even more highly-paid contractors, to help support growth in higher margin markets, like 5G, the Internet of Things and edge network services.

That has normally been the way of the world when it comes to handing experienced telecoms engineers their cards, to satisfy the bean counters in corporate accounts and the analysts in the money markets, all keen to see reduced fixed costs.

We have seen BT and others make thousands of engineers and other specialists redundant over the last 15 or so years, only to re-hire them as contractors in their own right, or through their employment at outsourcing firms, to fill the gaps created by a burgeoning broadband industry.

The sort of market that Telefónica wants to concentrate on now though is hybrid cloud. Microsoft and IT services unit Telefónica Tech have just announced a partnership to offer targeted hybrid cloud solutions to Spanish public administrations and companies in regulated sectors.

These potential customers require ultra-high data security, as well as seeing their data reside in Spain to address their “digital sovereignty” needs. The deal follows similar ones struck between other telcos and the main cloud service providers, including a recent one signed between Deutsche Telekom‘s T-Systems IT services unit and Google in Germany.

The Telefónica deal will see services offered over Microsoft’s Azure cloud and Microsoft 365 and Microsoft Dynamics 365 platforms, with those services complying to the demands of the European Data Protection Board (EDPB) through closely managed secure infrastructure.

Microsoft is contractually committed to legally oppose access to its enterprise and public sector customers’ data by any government, including the enforcement agencies of the US government. Microsoft is opening a dedicated cloud region, consisting of data centres, in Spain, that will help it with that commitment.

Telefónica and Microsoft aren’t being offered an open goal for such business opportunities by rivals though. As Google has also announced the expansion of its strategic alliance with Spain-headquartered IT services firm Minsait, an Indra company, to offer Spanish public and private sector organisations sovereign cloud solutions.

In a similar set-up to the one in Germany between T-Systems and Google, Minsait will provide external data encryption key management services to end customers, as well as other security services, cloud infrastructure management services and ongoing data centre auditing. And Google will offer its public and hybrid cloud platforms with no vendor lock-ins.

In Germany, T-Systems is also the one that holds and manages the encryption keys on behalf of customers, along with providing other security, while Google concentrates on offering cloud capacity and other services that go with it.

In the case of Spain, Google said it will “ensure data is encrypted at rest and in transit”, and that data will also be located in Spain, through a new cloud region that will open in the capital Madrid this year.

The Google/Minsait offering also has government support. Carme Artigas, secretary of state for digitisation and artificial intelligence, says of the effort: “The development of a digital economy and sovereignty necessarily imply that citizens and organisations have control of their data, and benefit from the availability of a sovereign cloud in Europe. This strategic alliance with a Spanish company is a step forward in the right direction.”

Google’s positive Spanish cloud move is somewhat potentially darkened by being in the sights of the German Federal Cartel Office (Bundeskartellamt), which has placed it, and its holding company Alphabet, under “special scrutiny”.

Using recently acquired regulatory powers, the Cartel Office can now intervene earlier and more effectively against the potentially abusive practices of large digital companies. It has deemed Google a company of “paramount significance” because of its market power.

It has noted that Google holds over 80% of the search and search advertising markets in Germany, giving the company a position of “economic power to act across markets with insufficient control by competition authorities”, said the regulator.

It added that Google has significant influence over other companies’ access to its users and advertising customers, through YouTube, Android and Play Store, for instance. The regulator said Google can gain a competitive edge in the market through its large user base, advertising services and the large amount of user data it collects across services and devices.

The processing of this data is already being studied by the Cartel Office, and after a similar declaration made by the UK Competition and Markets Authority (CMA) recently, regarding both Google’s and Apple‘s dominance of the mobile ecosystem, Google is facing a similar investigation there too.

In the case of Apple, it is also under scrutiny in India for its business practices and market dominance. The Competition Commission of India has ordered a probe against Apple for alleged unfair business practices with respect to its App Store.

It is alleged that Apple uses “anti-competitive restraints” and “abuse of dominant practices in markets” for the distribution of apps to users, as well as in the processing of payments for digital content used in apps on the Apple iOS operating system.

The CMA in the UK is looking at similar areas in the case of Apple. This, along with other probes, and the healthy new business directions that some telcos are heading in, demonstrate a dynamic market that must also be carefully managed for the benefit of everyone.