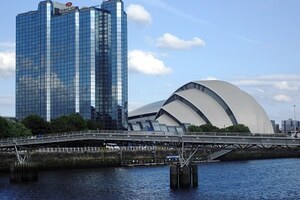 As the COP26 climate conference gets underway it’s good to report that some of the main telco and IT players are making an effort to show what they’re doing to tackle environmental targets, although they could do some other obvious things to make even more of a difference. Business technology journalist Antony Savvas takes a closer look.

EcoAct, an Atos subsidiary, has just released its Climate Reporting Performance report for the companies in the FTSE 100, DOW 30 and Euro STOXX 50 indices.

The report includes a leader board ranking the top 20 companies for climate disclosure, lifts the lid on sustainability reporting, net zero commitments, science-based targets and the climate impact of business across the indices.

It found that the IT/telecoms (ITT) space was the strongest performing sector globally, across the three markets, with six companies in the top 20. This included Microsoft and Apple taking the top two spots.

Almost 90% of ITT companies provide low carbon products or services, and 71% have set science-based targets for emissions, with most of them committing to the aim of helping to limit global warming to 1.5°C.

In the FTSE 100 alone, Vodafone was the second-top performing firm and BT was in third place. IT and telecoms research, conferencing and consulting firm Informa was in fifth place.

This is all very positive of course, but many of these companies’ end customers in the business space are clear they can do much more.

Ending the cycle of selling new smartphones and other electronics over ever smaller timescales should be encouraged at COP26, according to a poll of members at UK-based BCS, The Chartered Institute for IT.

I’m sure on hearing that call, the likes of Apple and Vodafone, along with many others, may shift slightly in their seats. Reusing and recycling electronic waste was chosen as the priority policy action to improve tech’s relationship with the environment, showed the BCS survey.

The world is drowning

The world is quite simply drowning in gadgets and other electronic waste, and more must be done to keep the items we buy going and upgraded, instead of getting yet another piece of kit which is only slightly better than the one before.

Legislation on “rights to repair” coming in around the world can help achieve this aim, said BCS, but only if properly promoted and supported by governments.

A majority (61%) also said they were not confident that IT and digital technologies were being used effectively by industry in the fight against climate change.

Alex Bardell, chair of the BCS green IT specialist group, says, “Rather than being dependent on new devices as soon as we have a failure, the ‘right to repair’ legislation should start making it easier for people to extend the life of their devices. If the starter motor failed on your car you would go to the garage and get a new part, rather than chucking the car away.”

Bardell adds, “The challenge is that the business model for electronics firms is to push their products, like smartphones, on ever smaller time cycles as a way of generating revenue, and it really doesn’t need to be this way.”

Quite rightly, he says the ongoing global chip shortage should be focusing minds on making sure more electronics and gadgets are repaired or refurbished.

Many businesses have to diversify to make sure they don’t go under as a result of changing markets. In the case of telcos, their first major business turnaround was when we moved from telegrams to telephones.

The move to car phones and mobile networks came next, bringing new competitors to the incumbent telcos in their wake. And the internet and broadband saw even more players come into the telecoms space.

The internet and the cloud created the big tech companies like Facebook, Amazon, Netflix and Google (the FANGs), among others, who have benefited from the networks that the telcos originally built, to carry their growing content.

In the case of Facebook and Google, and to a lesser extent Amazon, their advertising revenues have sucked the blood out of many a market. So, it was rather refreshing to see an old incumbent like BT get its own back in a small way.

Yes, BT has diversified into the advertising space. It has launched a new digital advertising platform to make it easier for businesses to run their own marketing campaigns, helping them to better promote their goods and services online.

BT’s Digital Marketing Hub gives firms the tools and support to create, publish and track their digital advertising across Google, Facebook and Instagram from a single platform. It’s benefiting from a market they created, just like they benefited from jumping on the networks the telcos built.

With many businesses moving online during the pandemic, a recent survey by Small Business Britain, in partnership with BT, found that 74% of small firms have increased their use of social media to promote their business online.

Also, 43% said they were using e-commerce more, while 30% had increased their use of paid social media advertising. BT’s offering is designed to allow more firms to take advantage of these digital sales channels.

Businesses can create ads and run multi-channel marketing campaigns while all the results feed into a single analytics dashboard. They can get automatic recommendations around the best keywords, ad copy and media spends to include in their campaigns, “helping secure maximum return on investment”, says BT.

BT has also built a new team of digital advertising experts to provide an optional managed service. This is charged to businesses through a service fee, which is applied to each campaign on a pay-as-you-go basis.

Chris Sims, BT managing director for the SoHo (small office/home office) unit, says, “Our Digital Marketing Hub has been designed to give small businesses peace of mind that their online advertising campaigns are reaching the right customers, in the right place, at the right time.”

I see many more telcos going down this type of route to diversify and play a greater role in the data services space, and to help give big tech a run for its money.