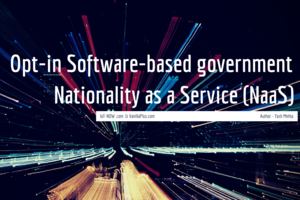 The government functions to serve and represent its citizens, but around the world, citizens experience substandard public services with minimum transparency.  The governments fail to support individuals and communities efficiently. The services provided in many parts, from education to health, are broken.

Reading this, some people might advocate the idea of bringing privatising public services. The privatisation of public services might ease the physical hassle one has to go through by large, but the controlling power lies with a handful of humans that people cannot trust, says Yash Mehta, an IoT and big data science specialist

Thus, currently, both systems fail to serve and represent the people. Then, what changes/measures can make citizens trust their elected government and offer services? The answer, perhaps, lies in something shaping and evolving a human life every day and can serve as a great assistant to its owners – Software.

To deliver a better public services experience, the government of many countries started to outsource software solutions. Consequently, the governments or leadership relies on third-party technologies or vendors (Microsoft, Google) to help or empower their citizens.

These third-party technologies or vendors offer packaged programs for citizens designed with a one-size-fits-all approach. The approach is unfair to the citizens who have the right to receive services that fit their specific needs. The leadership requires to view in-house software development as a core competency to understand the evolving needs of the citizens. It is time to bring the disruption of software power into public services.

The citizens can exercise their rights by opting in the vision of a software-based society. In this way, citizens can become a part of the government which works for them and build trust in that system. The vision of opting in for a software-based society is what Owen Miller, the founder of the Non-Human Party, is calling Nationality as a Service (Naas).

Belonging from the software world, he believes that an open-source software-based society is the most practical way to tackle future uncertainties and build trust in the people. The open-source software allows society to take control and build the services that it deems to be necessary for its daily functioning, be that a social graph, a job network or a search engine. Thus, such a society can deliver high-quality services to its citizens.

In addition, a software-based country can indeed tap on issues like data privacy concerns, linguistic barriers, free expression, dubious or misleading information, etc. that remain unresolved due to the conventional structure of governance. A few countries started building on this idea a few years back, like Estonia. The Estonian government made reforms back in the 1990s to turn it into a digital society, a movement now known as ‘e-Estonia’. This transformation includes 99% of public services being online, 96% of taxes being declared online, and 99.6% of banking transactions also taking place online.

The Non-Human Party says No to Bad Software Skills and Yes to a smarter civilisation they believe that it is not fair to offer dated and biased public-facing systems to the citizens. They deserve intelligent agents to serve society. These intelligent agents can be called software agents, bots, or robots (non-humans). They can serve as unbiased representatives of the citizens. Since the citizens contribute to the coding of the agents, they could be more trusted. The idea of software-based government believes in establishing a society that offers services by leveraging the power of software and offers an opportunity for citizens to opt into that society. The NaaS endeavors to bring a movement afoot for software services that are open source, and citizens contribute code to such software.

With software solutions, the party intends to build ergonomic architecture to create better occupational opportunities for the citizens. Software advances help bring in and formulate growth-driven strategies for society. Thus, shift the focus to the right issues and efficient ideas based on real-time data. A software-driven society holds the potential to transform into a unique industry, shaped by its resources and can tap on the current global opportunities. For example, any domestic software solution built by a country can be exported and monetised globally.

Unfortunately, the power of software is alien to many public representatives till today.  The software world’s unfamiliarity calls for the idea of NaaS. It offers citizens a proactive leadership that puts money and effort into building a country that hedges against future uncertainty. The idea of NaaS promises a powerful framework to expand evidence-based (data-based) understanding of policy choices, as well as directly improve service delivery.

The citizens across the globe deserve a government that focuses on digital capabilities, which includes embracing cutting-edge technology in governance and investing in R&D for building open-source software.  The party reimagines the society as a smarter and more capable one with the intelligent agents rendering the services as per the needs of the people. These agents can help the country to compete exceptionally well with the global software market.

The public policies/laws are framed based on conventional methods conducted in silos. For example, the Australian government ignores the correlation of anthropometric data with many other human factors while defining the height thresholds in defense military recruitment. Such parameters lead to creating an inevitable bias towards people who belong to varied cultural backgrounds.

Thus, Australia demands leadership that intends to look at society with a holistic view. With a concept like NaaS, Australia can opt for a software-based society with improved transparency, responsiveness and accountability.

The author is Yash Mehta, an IoT and big data science specialist.