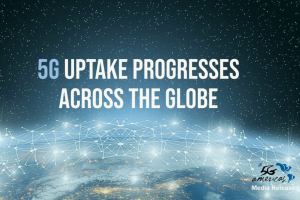 The state of the race for the fifth generation of wireless (5G) subscriber adoption has tightened up significantly, as global wireless 5G connections for Q1 2021 have been adjusted to 298 million, according to 5G Americas, the wireless industry trade association and voice of 5G and LTE for the Americas.

Last quarter, 5G Americas reported that data provided by Omdia indicated the world had reached 401 million 5G connections at the end of the year 2020. That number was subsequently revised downwards by Omdia due to specific improved clarity from one large country in the Asia-Pacific region. Connections reported for North America, Latin America & the Caribbean were not substantially revised.

Chris Pearson, president of 5G Americas says, “By all metrics, the interest and uptake in 5G is progressing everywhere as deployments, connections, coverage and the number of devices continue to grow. Estimates are being adjusted based on new information, as 5G continues to build momentum through new applications and use cases for both businesses and consumers.”

Revised data provided by Omdia indicated the world added 79 million 5G connections between Q4 2020 and Q1 2021, as wireless subscribers continued to adopt 5G at two and a half times the rate of subscriber growth as 4G LTE. With global pandemic impacts leveling out as vaccinations increase and work and commuting patterns normalise, 5G remains on pace in 2021 to nearly triple the number of connections it added in 2020, reaching 633 million globally by the end of the year.

Additionally, nine 5G networks went live globally in Q1 2021, bringing the global total up to 172 networks, according to data from TeleGeography. That number is expected to reach 273 by the end of 2021 and 313 by 2023. Availability of 5G devices also continues to grow rapidly, now at 511 commercially available 5G devices as of June 2021, according to the Global Mobile Suppliers Association (GSA).

Omdia analyst Kristin Paulin says, “Right now the US is driving 5G growth in North America. The major operators have blanketed the US with coverage and are now offering device incentives to further drive growth. On top of this, C-band deployments are set to further strengthen 5G offerings starting early next year.”

In its first year of commercial availability in Latin America and the Caribbean, 5G continues to grow with 1697 new 5G additions in Q1 2021. LTE remains the dominant wireless cellular technology with 20 million new LTE subscriptions in Q1 2021, representing 4% QoQ growth.

According to Jose Otero, vice president of Caribbean and Latin America for 5G Americas, “Latin America’s mobile markets continue their subscriber migration towards enhanced mobile broadband networks as 4G continues to exhibit rapid growth in the region at the expense of 2G and 3G. This growth has been accompanied by government policies directed at increasing the footprint of 4G networks. Soon, it will contemplate fixed wireless broadband over 5G as a solution for the provision of high-speed connectivity to suburban and rural areas.”

Forward projections for 5G and 4G LTE from Omdia remain healthy, with estimates of global 5G connections reaching 4.6 billion in 2026. Of that, 512 million is expected to come from North America and 277 million in Latin America and the Caribbean.

The number of networks using 4G and 5G wireless technologies are summarised here, as of June 2021:

For more information and to view a variety of statistical charts on the 3GPP family of technologies, and for a list of LTE and 5G deployments by operator, by region visit here.

Subscriber and forecast data provided by Omdia and deployment data by TeleGeography (GlobalComm).