Achieving growth through adversity in the New Normal 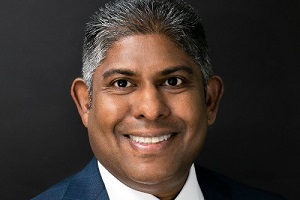 Seat of the pants survival mode is being replaced by a new focus on expansion and prosperity, albeit in a rather altered ecosystem. We consider what it takes to achieve growth as the new year dawns, and what technology will get us there. Report by Guy Matthews, editor of NetReporter.

If 2020 was about surviving and adjusting to harsh new realities, then 2021 is about predicting and preparing for the new normal and achieving growth through adversity. So pronounces Jeremiah Caron, global head of research & analysis with independent consulting firm Global Data.

“Throughout last year, we at Global Data kept an eye on how this crisis and the resulting economic impact was impacting businesses of all sorts, across all vertical industries,” he says. “We also considered the intersection with technology. It’s interesting to see what the role of technology and telecoms has been, as well as look at their impact on the enterprise.” 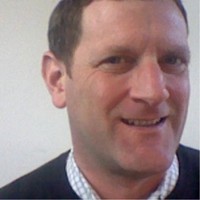 Caron says that with hindsight, it is easy to see how little businesses or governments were prepared for what happened: “But the impact of COVID on industry sectors was not uniform,” he concludes. “There were certain industries that performed fairly well during the year. And others that did not or could not fare well, no matter how well they strategised. If you consider industries like automotive, technology and even some areas of retail, the stock market’s reaction to their future prospects is actually quite positive. Then when you look at the construction industry, travel and tourism, and oil and gas, it is all much more pessimistic.”

Caron thinks that if we are looking for inspiration on resiliency and survival, then it important to acknowledge how technology, particularly network technology, performed heroically during the COVID-19 crisis: “It did so and continues to do so alongside health care and emergency services, and all the other key worker areas,” he says. “We knew how important these technologies were to our lives, but it has really been brought home. After some initial expectations of a complete collapse, none of that happened, and it all worked out very well so it’s quite a proud year to be in this industry.” 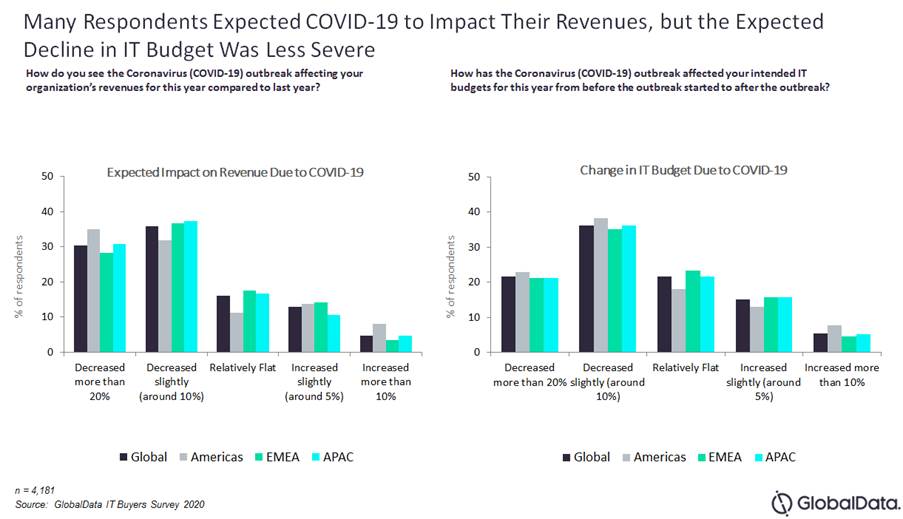 So how and where do enterprises invest now to help them move forwards? “Digitisation really is essential for survival,” he concludes. “Look at the retail companies that were already well down the digital path with their how they interact with customers, and you see that they are doing quite well. But those who relied on bricks and mortar are failing miserably. Accelerating your digital momentum as a business, no matter what business you’re in, has really hit home, both for supporting your customers, but also your staff.

How do you handle remote workers and keep the business ticking over, keep everybody motivated, keep the engine going? We saw longer term initiatives and software-led transformation projects put on hold.”

Global Data polled enterprises to find what they plan to spend less on, and what they are planning to spend more on. The big increases were in mobility, cloud computing, communications and collaborations and security. These were all deemed as essential for surviving and thriving going forward. 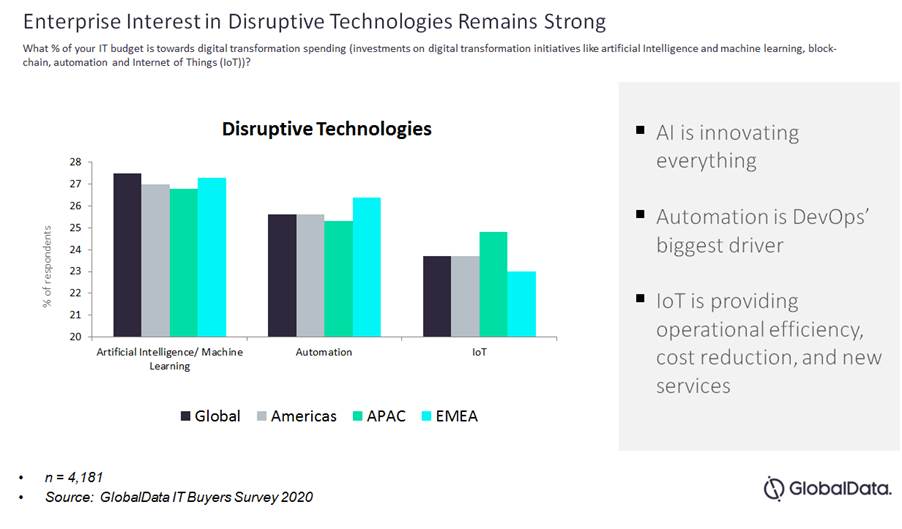 “We’ll see more use of disruptive technology,” predicts Caron. “As companies reprioritise and think about where they are going to spend their money an obvious thing to do is to improve operational efficiency make the business processes work better, cut costs, allow for less human intervention in processes. We found increased priorities around things like AI, machine learning, automation, IoT, which all stands to reason. We’ll see if these areas explode in 2021, as many expect they might.” 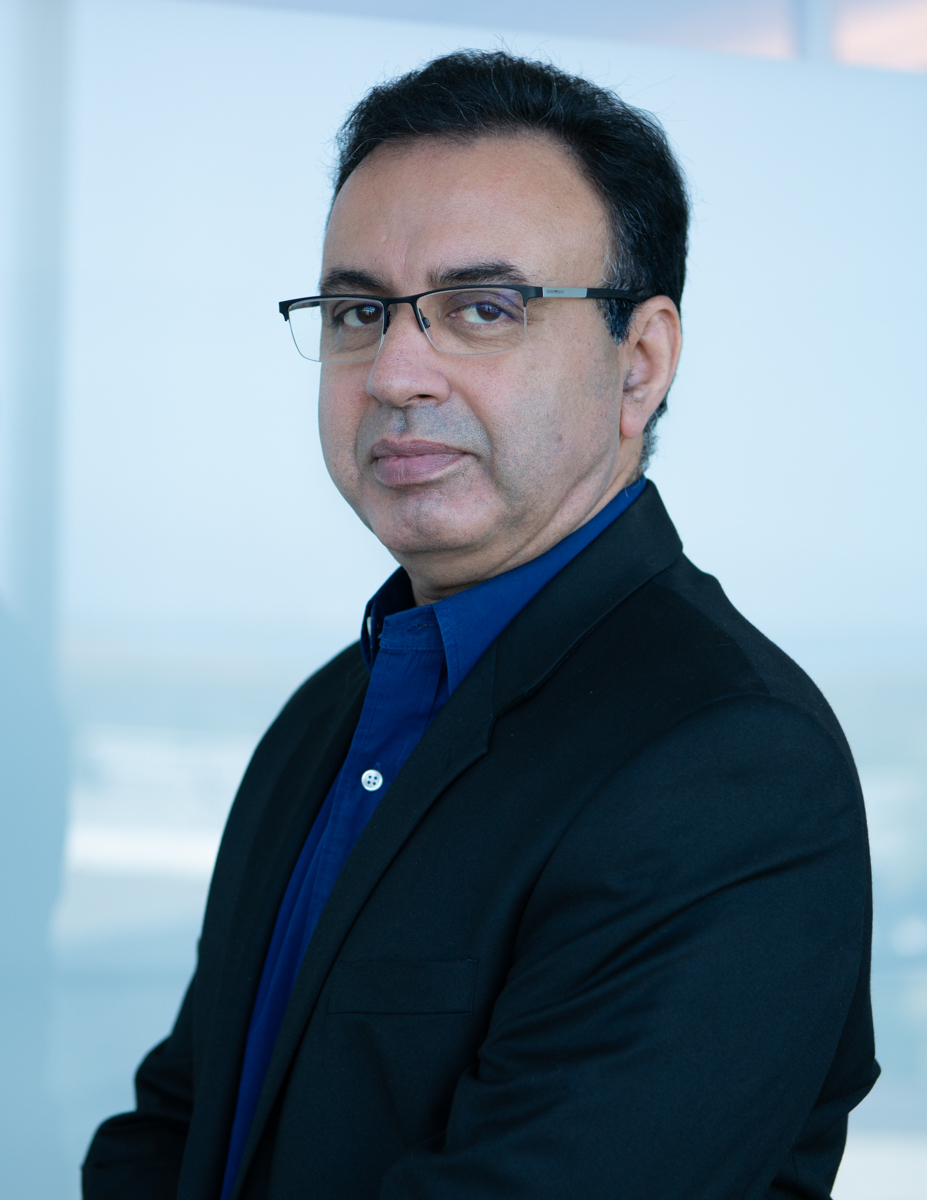 To help assess this possibility, Caron asks a panel of leading tech experts for their thoughts. Adhir Mattu is chief information officer with chip maker Marvell Semiconductor. He says that for the last three or four years the company has been on a transformational journey, “But as COVID hit, we started paying attention instead to things like employee health and safety. Working closely with our facilities and HR (human resources) teams we wanted to ensure that that was taken care of, and that it was our highest priority.”

To ensure everybody feels connected

The next priority, he says, was to ensure that employees were collaborating with each other, able to function not only in basic operational work but also carry on with key initiatives, “Now we’re still investing in those collaboration tools and productivity tools but in an accelerated way,” he claims. “In some areas, for example network bandwidth, we have accelerated the rollout of chat platforms as a way to ensure that everybody feels connected, enabled and able to work efficiently together.” 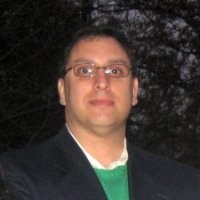 Ron Abreu is global IT director with SWM International, a company with a stake in diverse markets, particularly plastics and paper. He says his priority has been how best to integrate and communicate between different sites, and sustain manufacturing developments while under travel restrictions: “We have found ourselves starting to rely on augmented reality, in order to give us the ability to communicate better from site to site,” he says. “Our engineers can stay connected as we shift production lines from one location to another.”

He adds that security has been a big focus with so many people working from home on personal networks and devices, “Also, we have embraced operational analytics, to help a lot of the automation at the front line,” he concludes.

Pathmal Gunawardana, head of Americas with leading network operator TATA Communications believes it is a good time to ask questions concerning the various initiatives that people have been involved with over the last six months, as we head towards a post pandemic phase. How much was on roadmaps and how much was a course correction?

Mattu of Marvell Semiconductor says the company defined a transformational roadmap around three years ago, helping it navigate much of the disruption, and is now investing according to a schedule, “We have accelerated the platform we intend to use as our collaboration hub,” he says. “And to ensure connectivity from home, we upgraded network bandwidth. Now we’re looking at more automation and our Robotic Process Automation initiative, which is turning out well for us.”

SWM International’s Abreu says he is also accelerating RPA opportunities and trying to automate some mundane tasks in order to free up people to focus more on value added processes and activities.

Kevin Deierling, senior vice president with NVIDIA, agrees that the hot topic of the moment is the acceleration of digital transformation, “Microsoft has said that three years of digital transformation happened in three months after COVID,” he notes. “But it’s been very uneven, and most small and medium enterprises have suffered on that side. Where automation and security and data centre infrastructure investments have been happening is in the cloud and public cloud area. I think we’ll see things normalise and everybody move in the direction of automation and analytics and AI.”

Steve Berez is a partner with Bain & Company, a management consultancy based in Boston. He believes that too many companies still view transformation as a cost centre, and something to be minimised when times are tough. “They should be viewing technology as the best approach to saving money across all their functions, using advanced automation,” he points out.

“It’s also about being able to serve customers more effectively. It all means some companies have been able to respond better to changing needs than others. A lot of companies actually have not done a good job of helping their employees work remotely or respond to their customer needs or shift to online channels,” according to Berez. “It has been quite mixed. Even though a lot of companies have increased or maintained their technology spending, a lot of that has been just tactical spending around enabling remote work or increasing transaction capacity for digital transactions, and hasn’t been about more strategic improvements or helping customers deal better with changing circumstances.”

When it comes to changing technology priorities, Gunawardana of TATA Communications says he has seen enterprise customers go through three phases: “The first was ‘react’. Next came the recovery phase. And then the restore phase. I would characterise where we are right now as being on the recovery or restore phase, contemplating what that post-pandemic world is going to look like. I think we have a good idea as to where this is evolving towards automation, AI, ML. All those technologies are coming to the forefront.

We see CIOs building platforms, building applications, moving to the cloud, automating workflows, improving security. Now all of us are accelerating the roadmaps, achieving growth through adversity.”

Meanwhile, Berez of Bain says he sees companies spend way too much time and energy trying to predict the unpredictable and building detailed plans around those unreliable predictions: “Then, when a pandemic hits, or there’s social unrest or a recession, they have a very difficult time adjusting their investments. A better approach is to create an agile technology capability that’s able to rapidly pivot, based on any kind of external shock or any change in customer needs.”

Deierling of NVIDIA is convinced that we’re all in the middle of a Schumpeter’s Gale of creative destruction. “It’s an economic theory that really resonates right now where businesses are being destroyed, and new businesses and new capabilities arising,” he says. “It’s really important that businesses understand this, and start to see AI as central to it.

Every enterprise will become an AI business because those that don’t will fail. Analytics, robotics, 5G, IoT, this whole notion of a secure Private Cloud, investments in networking and security and automation, those are here to stay.”

Mattu of Marvell Semiconductor says that to meet this demand, the company has moved a lot of workloads to the cloud: “In the next couple of years, I don’t want any hardware on prem. Everything will become software managed.”

Learning from past use cases

Last word to Gunawardana of TATA Communications, “I think the underlying the key messages are very consistent across the board,” he concludes. “We need agility to drive the acceleration and adoption of next generation innovative technology. We are adopting AI in many areas of our portfolio. We’re asking things like how do you stop DDoS attacks by learning from past use cases. How do you apply AI to avoid this going forward? How can you automate as much as possible to drive the end user security experience? For those moving applications to the cloud how do we as a service provider serve customer requirements in automating all those workflows? How do we apply AI and ML into those scenarios?”