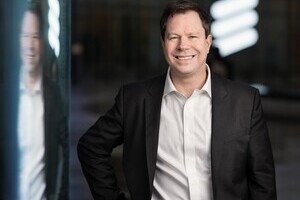 Mikael Back of Ericsson

When 4G launched, it offered some significant performance improvements over 3G. But with 5G, says Guy Matthews, editor of NetReporter, something far more profound is going on. The doors of possibility have been blown off their hinges. So what lies beyond?

With all the buzz that surrounds 5G right now, it is an interesting contrast to look back at the much more straightforward early days of 4G and LTE. So says Patrick Filkins, senior research analyst with independent consulting firm IDC. “Back then, we saw the emergence of four pillars cloud, mobile, social networks and Big Data,” he recalls. “All these fantastic technologies were starting to emerge, but in silos. Now we’re at a stage that I call ‘multiplied innovation’.”

Under this umbrella of multiplied innovation, Filkins sees a sometimes bewildering array of different technology categories, Artificial intelligence (AI), Internet of Things (IoT), blockchain and much else besides. “We have all these new standardised natural interfaces that allow applications to flow more freely than ever, and we have the advent of new platforms and communities,” he says. “It’s all very exciting. It’s all very intense. And it’s all very complex.”

A unifying force is needed that has the power to tie all this innovation together and make sense of it, and that, in the opinion of Filkins, is where 5G comes into its own.

“We have new insights being driven by AI-based automation, enabling real time decisions,” he explains. “We have IoT endpoint sensors. There’s so much information being generated out there in the technology ecosystem, it’s becoming a problem that the industry is trying to manage. Now, we also have the new dynamic edge, and more reach than ever.

There are service providers, cloud providers and enterprises themselves defining this new edge, driven by the ability to host applications and carry out processing in areas where we couldn’t before. So in this context, you can start to understand how 5G can help.”

Filkins looks ahead to more applications coming to the fore across multiple ecosystems, as well as API stacks, bringing new expectations, new societal norms and new ways of building networks. Added to this mix are new challenges driven by COVID-19, and the all-important imperatives of trust and security. 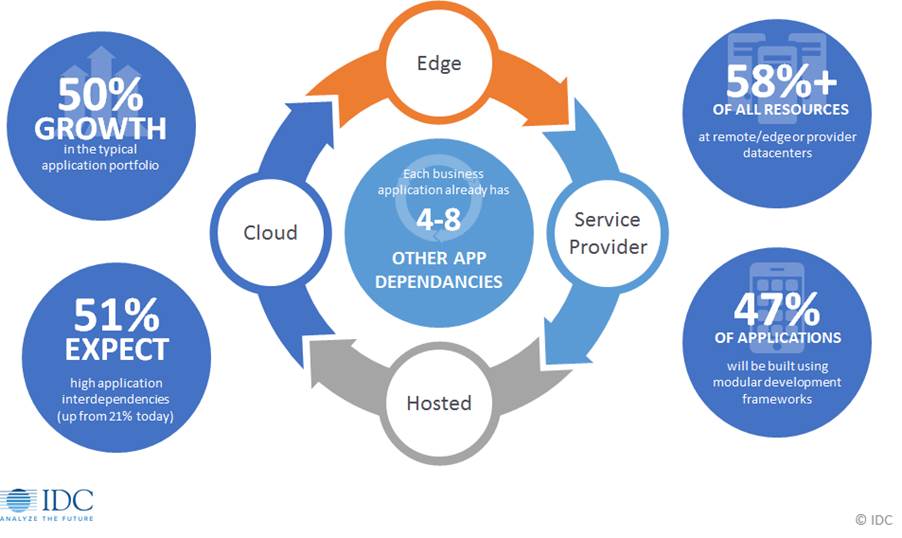 The impact of DX

IDC’s research puts some numbers on this, “We see 50% growth in the typical application portfolio,” says Filkins. “We see massive interdependencies being built, where each business application has four to eight other app dependencies. We see 58% of all resources at the remote edge needing a network backbone. How does the network help solve that problem? Plus we see 47% of applications being built using modular developed net frameworks. Networking needs to evolve to write the story, and I think 5G helps make that story happen.”

5G’s design, he says, is cloud-native to enable distributed software-mediated micro services. It has a service-based architecture designed to be programmable, leveraging AI-led automation to solve complexity, and help address different use cases and applications, “There’s a lot of capabilities baked into the 5G core network that we haven’t really unlocked yet that we’re just starting to unlock now,” he notes. 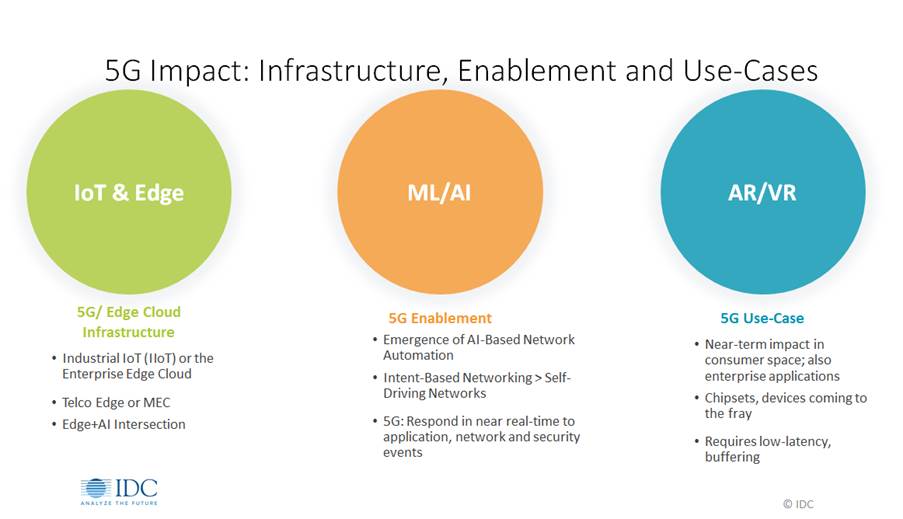 The impact of 5G

A number of industry experts were asked to help to drill down further into 5G’s potential, looking first at the importance of 5G with IoT and Edge.

Shekar Ayyar, EVP & GM, Telco and Edge Cloud with VMware believes we have all learned to recognise 5G as a technology that delivers better bandwidth, lower latency and a number of improved general characteristics, “But then there’s a whole lot of stuff that’s happening underneath the covers,” he notes. “I would call this the infrastructure or platform for 5G.

At that level we’re seeing things like the bringing of wireless and wireline networks together. Service providers and operators, having moved up the chain of virtualising and cloud-defining their own network infrastructure, are now making sure that security and privacy are built in. This is going to enable us to take the benefits of 5G and then translate them into fascinating improvements for everyone, both on the consumer and enterprise side. We’re seeing two worlds collide, the cloud world of the hyperscalers, public cloud entities as well as private clouds within enterprises. And then you have the comms world of the telcos.”

A rich new set of applications

Ayyar is optimistic that as cloud and comms come together, we will see programmable API-based interfaces that developers can access to create a rich new set of applications on top of edge infrastructure, all catalysed by 5G.

So much of 5G’s potential is brand new, enthuses Mikael Back, vice president & corporate officer with Ericsson, “If you look at the World Economic Forum, we had a demonstration in Davos this year of industrial robots working together and communicating,” he recalls.

“This just couldn’t have happened before. We have so many use cases that I think it’s almost meaningless for us to sit and list them all. In the end, 5G will be a bigger thing than 4G ever was. There are consumer uses of course, and we are starting to see industrial versions, such as the early adopters in the car industry who are looking to connect the car to a rolling data centre in a way that we have never seen.”

But Ronnie Vasishta, SVP telecom with NVIDIA, believes it is important to remember that both 5G and AI are in the early innings of their use and deployment, “AI is being used in multiple different areas and applications,” he says, noting that to really take advantage of this scenario, 5G must embrace AI.

“Most people have realised that AI can add value in certain over-the-top services, for example cloud gaming. And we’re also seeing the early days of 5G with XR, AR and VR. We had a demonstration in Coventry University in the UK, where we were able, together with partners, to put an AI solution together that allowed medical students to be fully immersive in their studies. You don’t have to use cadavers any more, you can actually get inside the body in an immersive way on campus.”

Back of Ericsson says that for the moment, the vendor is mainly using AI to operate and run networks more efficiently for its customers, “The first thing we did was the simple steps, like automation in our managed service operation, automating manual tasks,” he explains. “We’re utilising our role in the middle of the ecosystem and our unique knowledge of the network. Network optimisation is one of the obvious tasks that benefits very early from AI, and also resource utilisation.”

Back sees much potential in the areas of augmented reality and virtual reality, “We have been looking at this since about 2014 when we started with the early test systems,” he says. “AR and VR are cases where 5G can bring latency down to maybe to one millisecond and really create a true experience that you couldn’t do before.”

Vasishta of NVIDIA is already excited about future potential, even where it is not yet defined, “We need the ability to plan for the future in terms of use cases,” he says. “And see how revenue can be driven by those use cases, I think the easier ones to comprehend are those in the network management space with spectral efficiency and getting more out of spectrum. More challenging is how to take advantage of latency and performance gains.”

Ayyar of VMware believes this is the right time to take stock and consider where we go next with 5G. “We need a reformatted set of new applications that are going to take advantage of 5G, improving everything from efficiency and economics as well as global connectivity. All this with the pandemic still upon us, both bringing us closer together, even as we are getting sequestered in our own environments.”

Ericsson’s Back wants 5G to become a digital platform that we use to digitalise almost all sectors of society over the next few years: “That is something we have never done before, certainly not at all on one single scalable platform,” he concludes.

Vasishta of NVIDIA is unable to remember a discussion on why 4G matters. “Just the mere fact that we’re asking the question of why 5G matters indicates that it’s important,” he believes. “5G is the framework that enables so many capabilities where you need the latency, the performance, the standardisation. Just think about the sheer amount of data that’s being generated through this enablement of 5G anytime, anyplace, anywhere.”