With a global pandemic, devastating wildfires, racial tension, and political divide, it is not surprising that 2020 was named the most challenging year in the past decades. The year has been grim for data privacy as well, with leaked personal data records reaching numbers the world has never seen before.

Atlas VPN analysis based on Risk Based Security data reveals that exposed data hit a record 36.1 billion in the first three quarters of 2020. The number of data records leaked this year is more than two times higher than in the entire year of 2019 and make up more than half (51%) of all exposed data in the past five years.

A record-high number of data leaked this year is a result of 2,953 publicly reported data breaches. However, unlike leaked data records, data breaches dropped by 51% compared to the same period last year when 6,021 violations were reported.

Rachel Welch, COO of Atlas VPN, comments, “Data breaches are growing in severity, with fewer breaches exposing more records than ever before. Businesses should take note of this and make cybersecurity one of their top priorities next year. It is always better to be safe than sorry, especially when it comes to private data, as one unfortunate event can cost a company its reputation.”

The most commonly exposed data types are names (45%), emails (36%), and passwords (29%). This is all the key information needed for accessing someone’s account

Healthcare sector continues to suffer most

While no economic sector is guarded against cyber breaches, some sectors suffered more than the others. 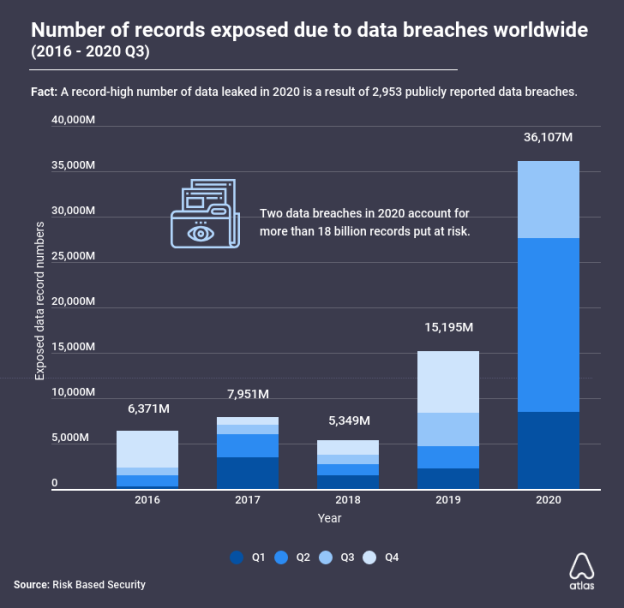