The outlook for SD-WAN in a post-COVID landscape 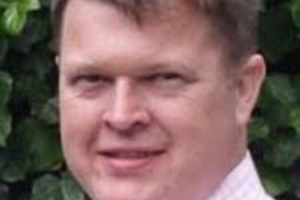 SD-WAN has unquestionably been one of the most important developments in enterprise connectivity in the past several years. But given the impact of the COVID-19 pandemic what lies ahead for this market, asks Guy Matthews, editor at NetReporter @ NetEvents.

Network managers and CIOs everywhere are keen to embrace a working environment that is connected digitally, rather than physically, driven by the power of cutting-edge software not legacy hardware. That is why the last few years have seen pressure for the kind of flexibility, scalability, efficiency and security that SD-WAN can enable.

It has been a dynamic market for start-ups and veteran networking vendors alike. We’ve seen the acquisition of hot new players by established names, with CloudGenix, VeloCloud, Viptela and Nuage Networks acquired by Palo Alto Networks, VMware, Cisco and Nokia respectively. HPE has just made a move for Silver Peak.

As well as acquisitions, the SD-WAN market has also seen some interesting collaborations and partnerships. Netcracker, part of NEC, has for example joined up with Versa Networks to deliver a complete, scalable managed SD-WAN solution based around Netcracker’s network-as-a-service (NaaS) offer. Key players such as Fortinet and Aryaka are also currently thriving.

So what’s next for a market currently experiencing a pandemic-related slowdown? Is the outlook healthy? 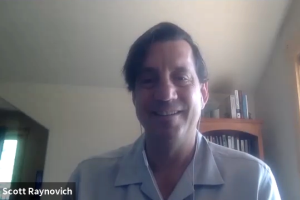 Scott Raynovich, chief technology analyst with analyst firm Futuriom believes the inherent qualities of SD-WAN will see its popularity sustain: “We’ve gone through several generations of networking, starting with client server and followed by the explosion of the Internet,” he points out. “The next stage was the data centre and then cloud, with each stage leaving remnants of the previous generation. What SD-WAN does is arbitrate between these bits and pieces, and find the best way to get you where you need to go.”

COVID-19, he believes, will end up simply emphasising the value of SD-WAN as the glue that pulls everything together, a sort of a built-in VPN overlay, essential at branch sites and for the many people now working at home. “There are so many different applications and use cases for SD-WAN,” he points out. “At Futuriom we try to nail down why people are buying SD-WAN and what they see as the benefits. This year people see SD-WAN increasingly as a security tool.” 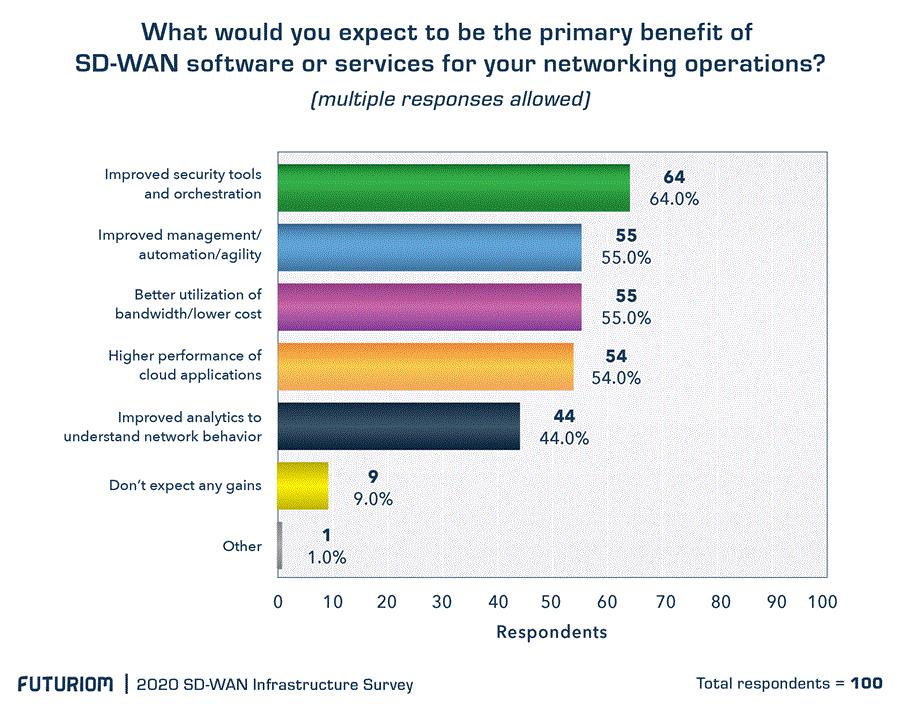 “We found that 64% of people we asked said the main benefit was to improve security tools and orchestration of security,” observes Raynovich. “SD-WAN is also often seen as a way to compliment MPLS circuits or other private circuits and give you a cheaper way to leverage broadband or internet in a secure fashion and lower the cost of your bandwidth.”

Erin Dunne, director of research services with analyst firm Vertical Systems Group, views the market through a slightly different lens: “We are focused on carrier-managed SD-WAN services,” she explains. “We define that as a carrier-grade offering for business customers that’s managed by a network operator, meaning you are paying a bill to a network services operator on a monthly basis.” 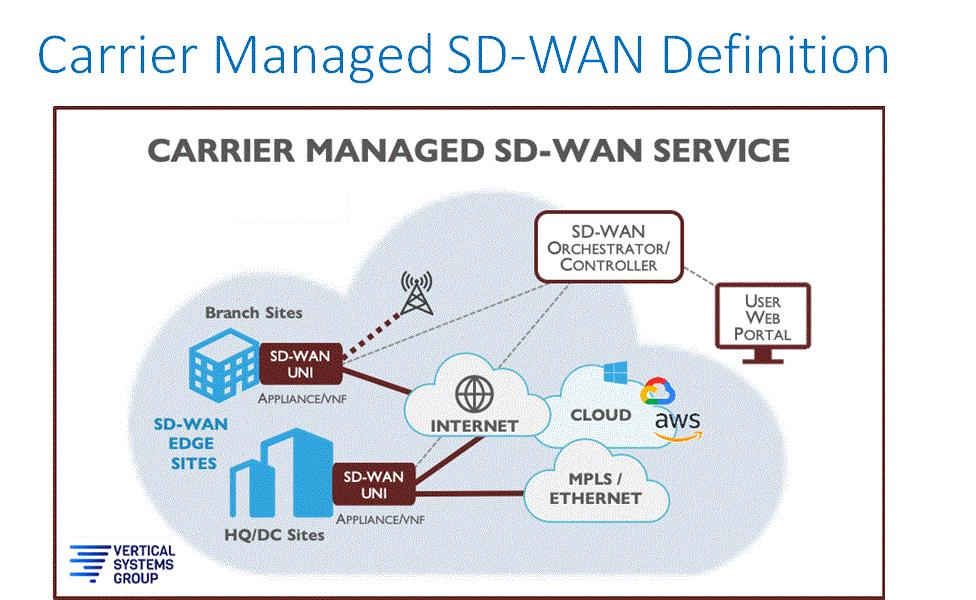 “If you look at a timeline of what’s happening in the SD-WAN carrier managed services market, we saw triple digit growth in 2019 – a very healthy and robust market,” she says. “We saw that continue into January and February of this year. In March, we start to see the demand side stifle due to the pandemic. Installations couldn’t get into the building, enterprise customers all went home, implementations are starting to either be deferred or cancelled. The hope that later in the year we’ll start to see revenue kick back up and pipelines start to recover.”

Shin Umeda, vice president and analyst, Dell’Oro Group, agrees that there has definitely been a major impact from COVID-19 on the market. 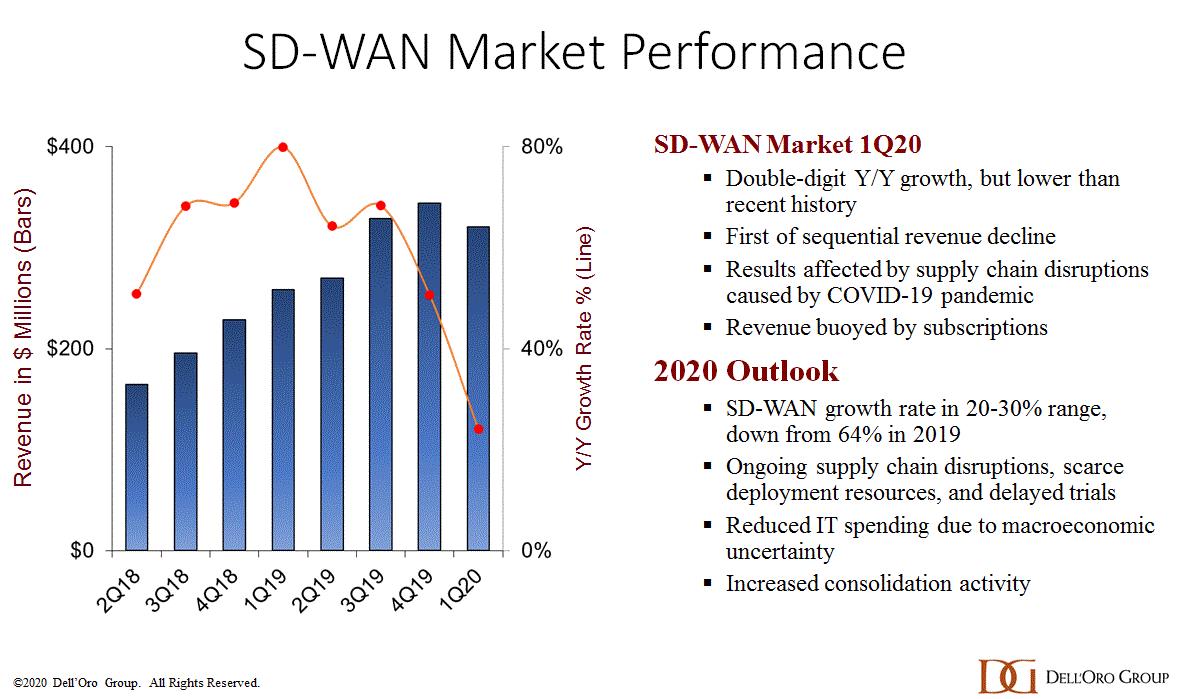 “If you look at it from the point of view of the access router market, the big branch office devices that form wide area networks, that has traditionally been dominated by a single vendor – Cisco,” he says. “Now what we’re seeing is SD-WAN and a more software-centric approach with many new vendors. Enterprises are really focusing in on the benefits of using a centralised software centric model – gaining more control of their network and really attacking the way the traffic patterns have changed. SD-WAN is not something that just emerged out of thin air, but it’s an alternative to technologies that existed in the past.” 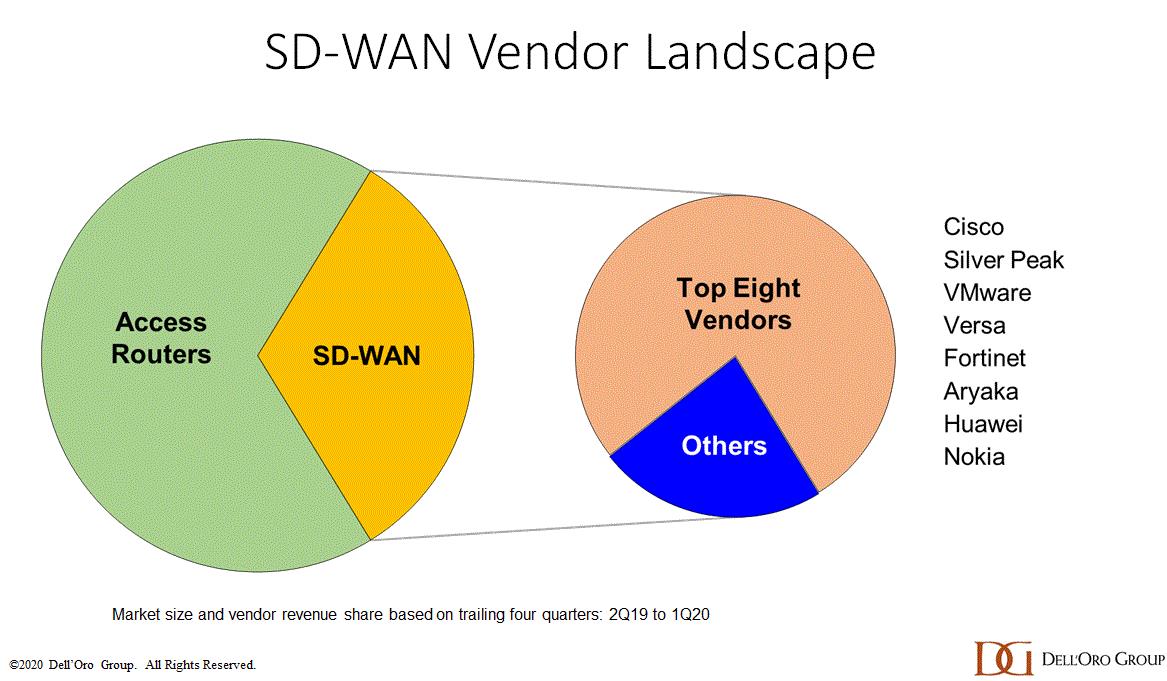 Brandon Butler, senior research analyst, Enterprise Networks, IDC believes that looking at the economic situation, the macro environment that enterprises are in right now is a journey from crisis mode into slowdown, through to recession and then somewhat of a return to growth and a new normal.

“The initial phase of the journey was around business continuity and cost optimisation,” he says. “Now we’re getting into the era of business resiliency.” 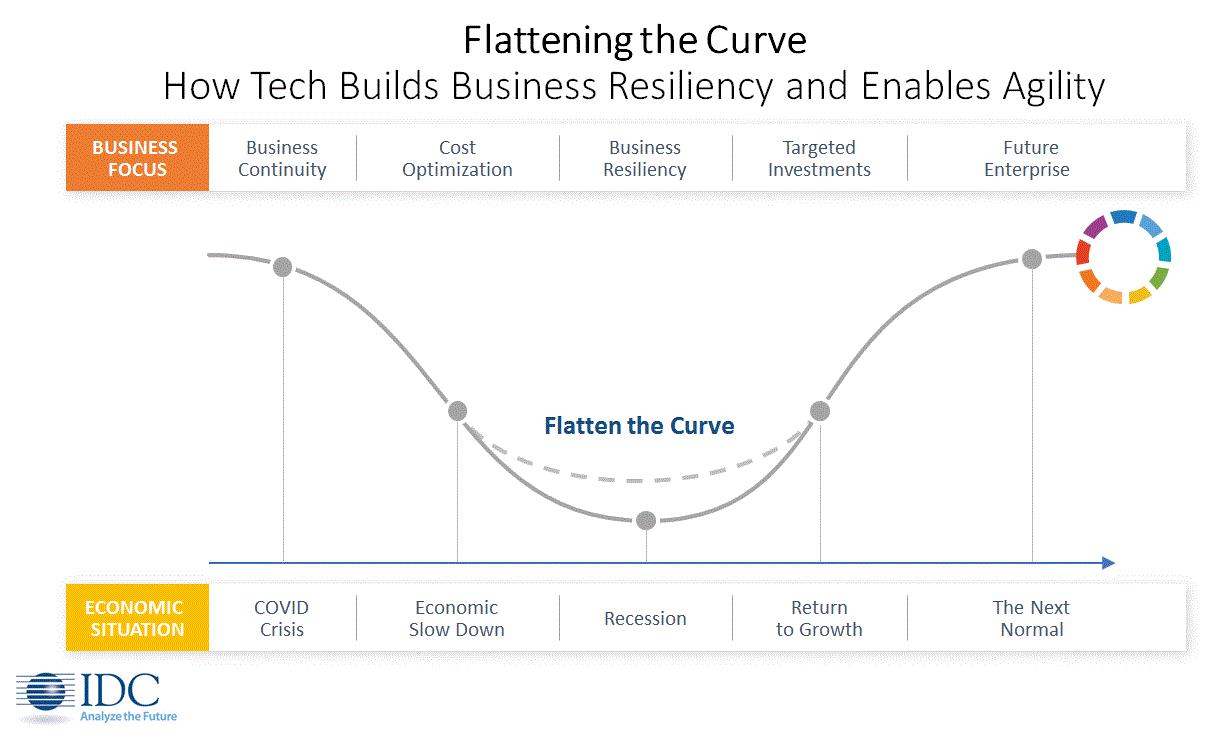 “There are targeted investments that are going to be made for important technologies, and one of those is going to be around SD-WAN,” predicts Butler. “We looked at investment plans for wide area networking, including SD-WAN, and how they have been impacted by the COVID situation. And the big takeaway for me from this is that SD-WAN is a relatively resilient market. Almost half of respondents are actually going to be accelerating their investments. We believe that SD-WAN could be one of those areas that could see targeted investment. We expect increased investment in cloud services. And in turn, we expect enterprises to increasingly invest in SD-WAN to be able to enable those connections to the cloud and to the data centre.” 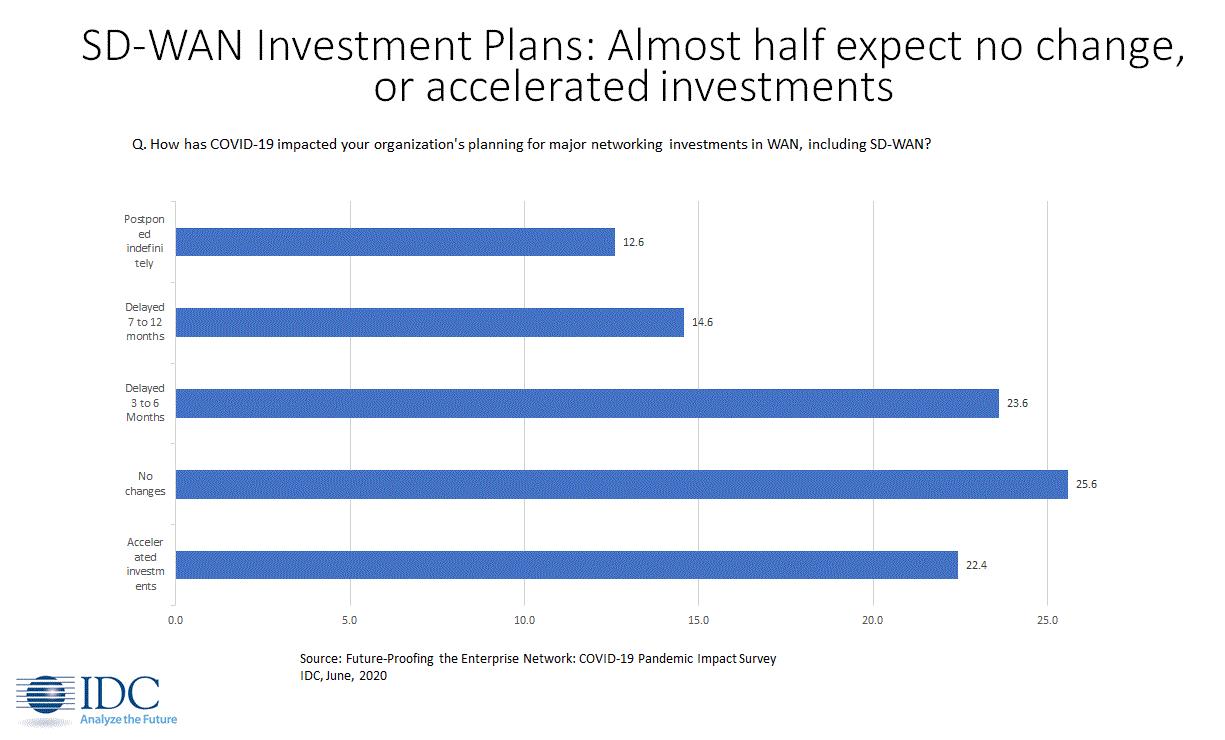 Scott Raynovich, chief technology analyst, Futuriom feels certain that the SD-WAN market, even with a major post-COVID bounce, is likely to see some major consolidation over the next few years: “You hear people saying there are 50 plus SD-WAN vendors out there, but it’s really 10 to 12 of them controlling most of the revenue,” he observes. “How are these other vendors going to survive?” he wonders.

Shin Umeda, vice president and analyst, Dell’Oro Group, notes that the market is a complex mix of companies: “Some are just software based, some are analytics based and moving into SD-WAN,” he says. “It’s hard sometimes to decipher exactly what companies are doing. It’s difficult for smaller players to gain momentum and to gain the installed base to be able to sustain the business. That’s perhaps why we are starting to see consolidation around a relatively small number. We’re four or five years into SD-WAN as a market and not every company is going to be able to keep developing products unless they start to see some returns on their investment.”

Brandon Butler, senior research analyst, Enterprise Networks, IDC points to some important merger and acquisition activity that the market has already seen, such as the recent acquisition of CloudGenix by Palo Alto Networks: “We expect that to continue with this long tail of smaller SD-WAN vendors,” he forecasts. “We also expect to see other vendors move into this market, for example HP Aruba which is talking about building integrations between the enterprise campus and Wi Fi environments out to the branch.”

Scott Raynovich, chief technology analyst, Futuriom also expects to see consolidation speed up: “If there are 40 companies trying to be bought out or have an exit and there’s one happening per year it will take 40 years, so no doubt some will fail.”

But is the COVID crisis ultimately good or bad timing for SD-WAN? Will the people who invested in it before the crisis hit be the first to emerge? Or is it unlucky timing that just as the market lifts off, it gets squeezed.

Brandon Butler, senior research analyst, Enterprise Networks, IDC is an optimist: “I’d say the glass is half full,” he reassures. “This has been one of the fastest growing markets within the enterprise networking market that we’ve been tracking at IDC over the last couple of years. And while 2020 will dampen the market because of COVID, we believe that growth will return towards the end of this year. And then back to a fairly robust growth next year. I think some of the drivers that we see in terms of how businesses are responding in COVID times, relying more on cloud-based applications, for example, will also help to drive SD-WAN adoption into the future. Some businesses are actually going to be accelerating their investments with SD-WAN, because maybe they want to ensure those connections to cloud-based applications. Others are delaying or maybe postponing their investments as well. Compare it to something like the enterprise wireless LAN market, for example, which we expect to be hit harder this year.”

So what of the nearly 30% of Futuriom’s respondents who have not as yet made an SD-WAN move? Given all the advantages described by experts and analysts, what is holding them back?

“It’s probably money,” concludes Scott Raynovich, chief technology analyst, Futuriom. “Most technology investment cycles are driven by upgrades. Most of the people I’ve talked to, who are implementing SD-WAN are evaluating branch office routers. Do they buy a new router or buy SD-WAN, which does routing and a bunch of other stuff too. The people that are stuck are probably looking for budget to go through this upgrade cycle.”

Brandon Butler, senior research analyst, Enterprise Networks, IDC believes there is also the power of inertia: “Some enterprises have a fat MPLS connection between their branch office and their data centre, and they’re not heavily using cloud services,” he points out. “They don’t have a huge need for additional cloud services. We have similar survey data in single digits of those not interested in SD-WAN. And that’s sort of why think of the profile. There’s a certain class of the market that’s just not willing to move on to a cloud-based management of their enterprise networking technology.”