Software is eating Telecom: How virtualisation and open source are upending the entire industry

Until recently, network technology vendors to communication service providers (CSPs) had a well-established competitive market position with brand loyalty, long-standing customer relationships, and well entrenched proprietary solutions. However, an inexorable move to software-based (virtualised) solutions, combined with the increasing prevalence of open-source resources, is disrupting the market dynamics and will have profound implications for the industry structure. Report by Liliane Offredo-Zreik and Dr. Mark H Mortensen of ACG Research.

This, combined with the long cycles involved in introducing new solutions, or in upgrading existing ones due to long testing cycles, created a relatively closed ecosystem with high barriers to entry and high switching costs. It also drove costs up, as it increased the bargaining power of suppliers; it limited the number of competitors and stifled innovation because younger companies with fewer resources found it difficult to penetrate the ecosystem.

The disruptive nature of virtualisation

The inexorable migration to software-based, virtualised solutions is disrupting this ecosystem, with profound long-term consequences. Increasingly, telecom operators are introducing virtualised software solutions in their operating environments. Their long-term goal is of a fully software-driven ecosystem with software-only network elements running on commodity off-the-shelf servers (COTS) or open source hardware, hosted in local offices, in distributed data centres or in a cloud-compute environment.

The software-based systems are not less complex, and the incumbent vendors are rushing to either port their existing solutions on COTS or redeveloping parts of those systems to become software based. It also allows new software vendors to enter the market without the long design, manufacturing, and logistics supply chains of traditional hardware. 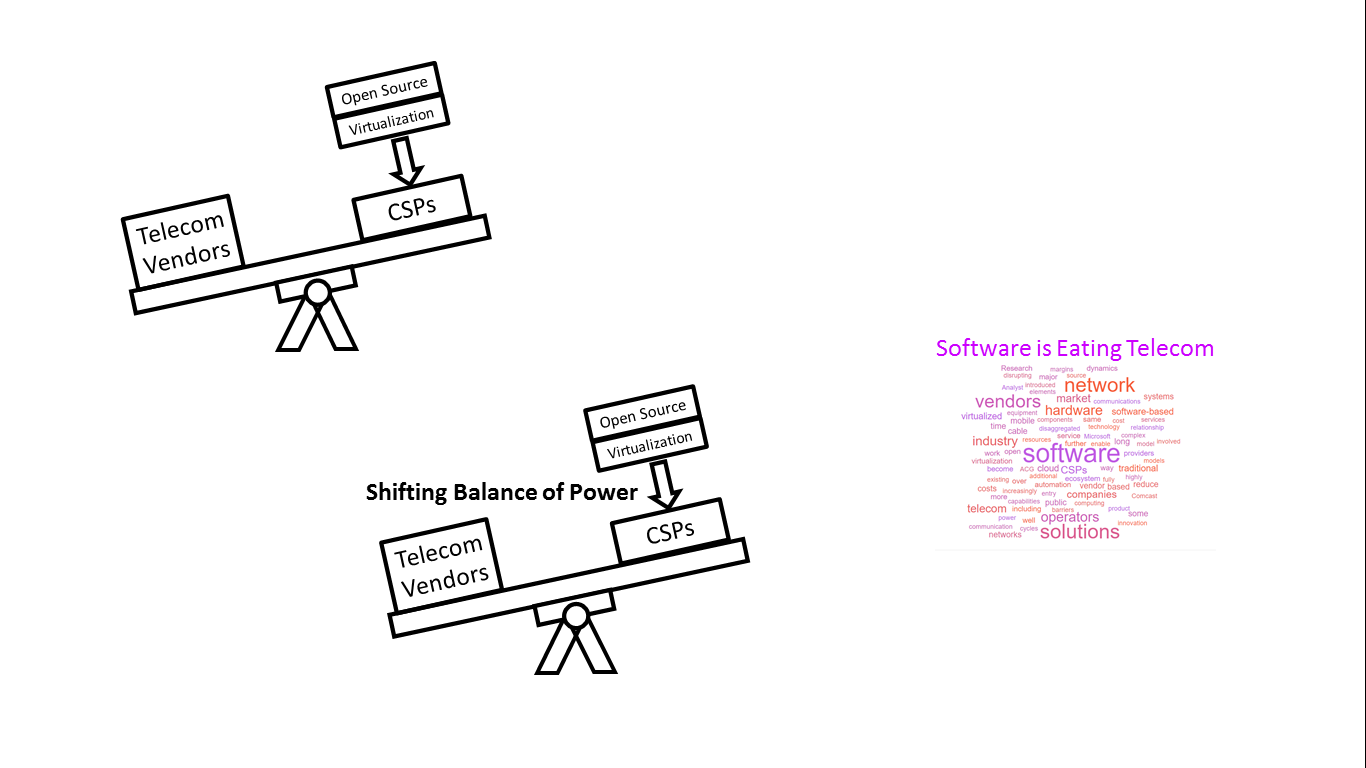 At the same time, the CSP traditional development/deployment paradigm, which was largely based on the waterfall model and involved protracted cycles, is slowly making way to an agile framework, based on the Continuous Integration/Continuous Deployment model where incremental changes are introduced on an on-going basis, enabled by a microservices-based, modularised architecture.

This paradigm allows minimally viable products to be introduced and then rapidly enhanced, reducing the entrenched foothold of existing suppliers and opening the way for new entrants, further transforming the market dynamics.

The role of open-source collaboration

Most operators do not have the capacity nor the ability to undertake massive development efforts, particularly because some of the solutions they need are highly complex. However, open-source hardware and software and disaggregated network elements go a long way to alleviate the need to undertake end to end developments.

Recent disaggregated network element (DNE) projects, some including open-source hardware and software, have been created by CSPs throughout the various telecom equipment domains, from radio backhaul to the core networks, optical access and transport equipment, and edge computing environments, among many others. DNEs are essentially public open source Lego-like building blocks that run on standard computing and storage hardware or programmable ASICs that standardise designs and that can be used to create solutions. They enable CSPs to select the best combination of commoditised hardware and specialised software components. DNEs are designed to reduce vendor lock-ins and further lower the barriers to entry for new vendors, increasing competition in sales and support.

New engagement models are emerging. The traditional supplier/customer relationship is making way to a cooperative engagement model, where the operator and the vendor work hand in hand on developing solutions. Furthermore, unlike traditional models where the vendor is paid upfront and is further compensated for on-going support, new frameworks are emerging where the vendor is compensated based on the success of the operator. One such arrangement was the Infinite Broadband Unlocked that Cisco introduced in 2018 where it charged cable operators based on broadband consumption over their networks, rather than upfront licenses. Such arrangements are facilitated by software-based solutions and are likely to become more prevalent over time, further disrupting market dynamics.

The commoditisation of the hardware components of the network will reduce the vendors’ margins and potentially reduce overall CSPs’ costs. However, the CSPs will have to bear the additional costs of testing multivendor arrangements, configuring, and managing the larger number of network components, as well as securing the entire network.

These additional costs will eat into the potential savings and are expected to require a hefty dose of automation. Such automation will come from vendors, systems integrators, as well as from additional open-source initiatives such as the ONAP program, the open-source version of the AT&T ECOMP home-grown system that seeks to provide real-time, policy-driven software automation of AT&T’s network management functions.

It is too early in the game to scope the full impact of this unfolding transformation. It is likely that it will increase the speed of innovation and improve the cost structure for operators. At the same time, intense competition may reduce vendors’ margins, decreasing their ability to invest in R&D. However, an increasingly symbiotic relationship between operators and vendors will improve industry dynamics, overall, as it will lead to better targeted solutions, more cost efficiency and improved customer experience.

Technological changes and industry realignment are enabling CSPs to gain greater market control and to reap larger efficiencies by replacing monolithic hardware and software solutions from major vendors with disaggregated networking elements with open-source software on commoditised, standardised hardware, and by adopting co-development models. This will reduce the pricing power of major vendors and compress their margins but may lead to greater innovation in the industry.

The authors are Liliane Offredo-Zreik and Dr. Mark H Mortensen of ACG Research. 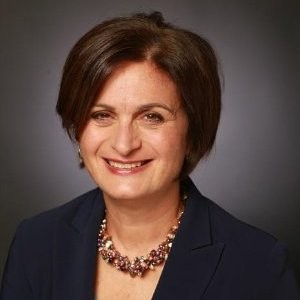 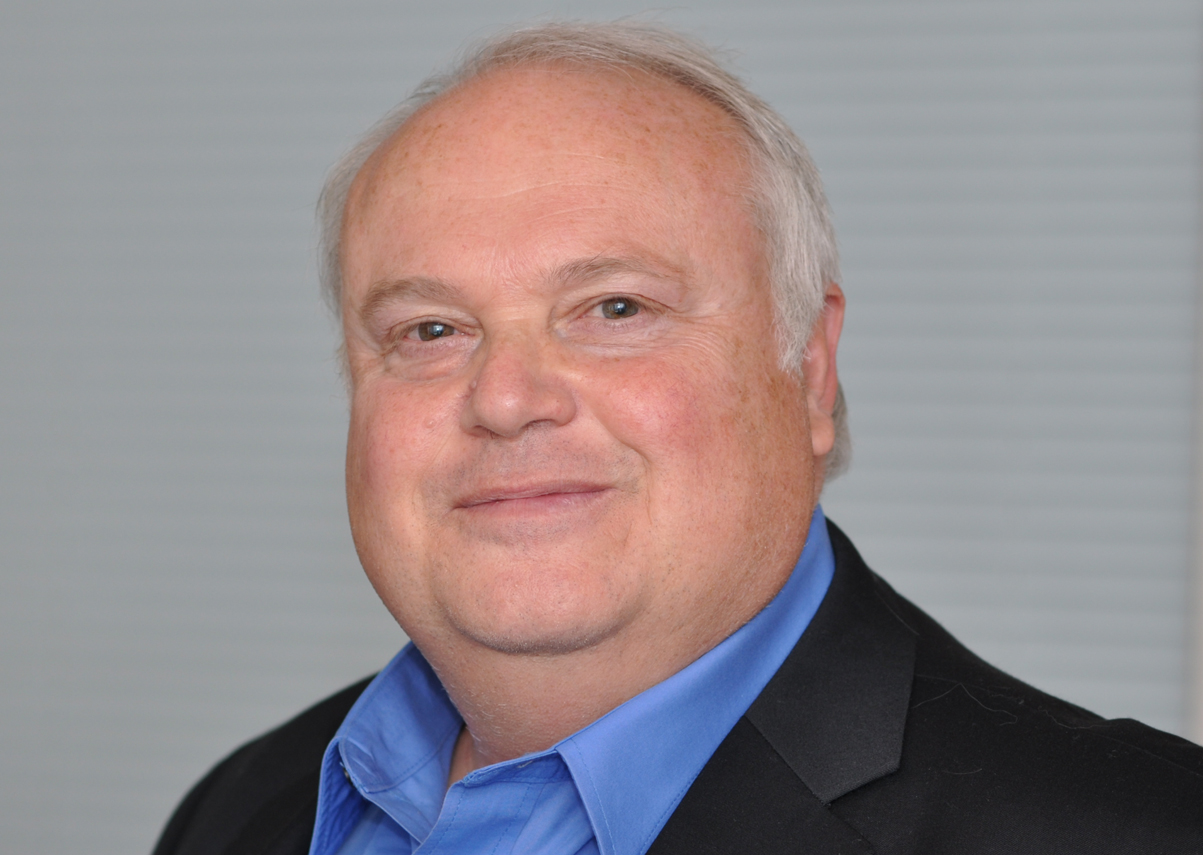 Liliane Offredo-Zreik (loffredo@acgcc.com @offredo) is a principal analyst with ACG Research. Her areas of coverage include the cable industry, SD-WAN, and communications service provider digital transformation. Prior to her analyst work, she held senior roles in major telecom and cable companies, including Verizon and Time Warner Cable (now Charter) as well as with industry vendors and has been an industry advisor in areas including marketing, strategy, product development and M&A due diligence.

Dr. Mark H Mortensen (mmortensen@acgcc.com @DrMarkHM) is an acknowledged industry expert in communications software for the TMT sector, with over 40 years of experience in OSS and BSS specifications, network operations, software architecture, product marketing, and sales enablement. His work has spanned the gamut of technical work at Bell Labs, strategic product evolution at Telcordia, CMO positions at several software vendors, and as a research director at Analysys Mason. He is currently the Communications Software Principal Analyst at ACG Research focusing on network and business automation.