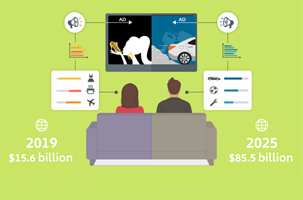 Addressable TV advertising will leap from US$15.6 billion (€13.9 billion) in total worldwide revenue in 2019 to almost six times that value at $85.5 billion (€76.3 billion) by 2025, according to a new report.  This reflects advertising dollars switching to addressable as the platforms mature and are better understood by the advertising community.

This is the principal finding of the latest Rethink TV report, Addressable Advertising Forecast to 2025 Addressable advertising boom across all regions and platforms.

This boom in addressable TV advertising will occur in all sectors of pay TV and all major geographies over the next six years, engaging viewers, driving response for brands and boosting revenues for video service providers.

Aggregation of inventory will be a key driver by increasing the size of addressable targets, making them viable for larger brands and overcoming fragmentation within the ecosystem. The main boost for broadcasters and Pay TV operators is that these adverts fetch higher CPMs (Cost Per 1000 impressions) than general spots broadcast to all viewers of a programme. 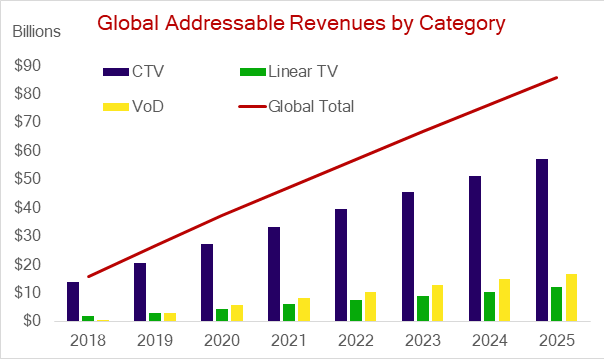 There are three types of addressable TV: linear TV, VoD/catch up and Connected TV (CTV) delivered by traditional pay TV operators over the Internet.

The rise of Connected TV is also a major driver and has propelled much of the early growth in addressable TV advertising, especially in North America and the larger economies of Asia Pacific. This reflects lower barrier to entry since ads can be targeted more easily to TVs that are directly connected to the internet, avoiding the need for a dedicated platform.

CTV advertising will continue to account for most of the growth in addressable TV advertising, but coming from a lower base linear and VoD TV advertising within the traditional broadcast service will actually register larger percentage gains over the period until 2025.

The report breaks down the analysis of addressable and online TV advertising by the main geographical regions, identifying key drivers and constraints in each case.