Could your phone be contributing to the destruction of the Amazon? 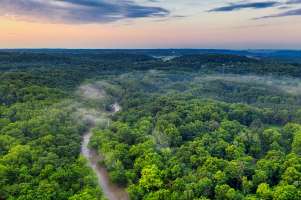 The world’s attention has been drawn to the wildfires raging through the Amazon rainforest. Many believe that cattle ranchers and farmers caused the flames by clearing the land, but in reality, this hasn’t been the only cause of the Amazon fires and subsequent destruction, says Biju Nair, president & CEO, HYLA Mobile.

Gold mining has been, and still is, contributing to the destruction of the largest wild ecosystem on earth. While the majority of mined gold goes towards making gold bars and jewellery, the global device industry is also taking its fair share of the rare earth metal to produce smartphones.

While this trade is a very lucrative business for miners, what can be done to prevent the destruction it is causing to our planet?

The scale of the issue

According to a specialist from Wake Forest University, there is a gold rush taking place in the Amazon which resembles California in the 1850s. To date, independent miners have uprooted nearly 250,000 acres of rainforest in the Madre de Dios region of Peru. Additionally, research shows 415,000 acres of tropical forest across South America has been lost to gold mining. This problem is real, and of epidemic proportions.

In addition to uprooting plants and trees, the miners dig two to four metres into the ground, where the soil is rich in carbon. This mining liberates that carbon back into the air, destroying nutrients in the soil that are vital for the plants in the rainforest. As if this wasn’t enough, mercury – used as an amalgam to retrieve gold from the dirt – contaminates the region’s water and food supply. Researchers have seen serious effects on the nervous, digestive and immune systems of people living close to gold mining activity.

The smartphone industry consumes 335 tons of gold annually and smartphone manufacturers are taking steps to address the issue of Amazon gold mining. Steps include supply chain refinement and making all of their suppliers adhere to conflict minerals policies and subject to third party audits. But more can be done.

What can our industry do?

While regulation and stricter policies around mining and deforestation are needed, there are additional steps that can be taken. A major one being reducing manufacturing of new phones by extending the lifecycle of existing mobile devices.

Today, most consumers in the North American market tend to upgrade their smartphone after 2-3 years – even though these older devices are likely to be in excellent condition.

For quite some time device sales have been saturated, one of the contributing factors has been the rising cost of new devices. But consumers aren’t making the most of trade-in programmes, either. Only 25% of consumers who are upgrading are trading-in their older devices. This seems astounding, especially considering the fact that the average trade-in value of these devices is around $180 (€161).

Data privacy concerns are not valid as device repurposing companies adhere to very strict standards that require certification of complete data erasure from older devices. Any device that cannot be certified to be data wiped, has to be repaired to be data wiped. If all else fails, the device has to be physically destroyed to avoid any potential data leakage.

For every device that can find another home, one less device needs to be manufactured, and less damage is caused to our planet. In fact, research has shown that extending the lifespan of smartphones by just one year can save as much carbon emissions as taking two million cars off the road each year.

The mobile operators, retailers and manufacturers who promote trade-ins as a normal part of the device purchase transaction can see subscriber engagement increase. It also means devices stay out of drawers, and out of landfill. Approximately 20 million devices in the US come back annually through trade-in programmes. As a result, 680,000kg of ore didn’t need to be mined; 410,000kg of cyanide didn’t need to be used to extract gold from the soil; and other toxic substances like mercury were not used either.

The message for the smartphone industry is simple: trade-in, recycle, make money, and most importantly, save the Amazon.