Samsung dominates the 5G smartphone market, accounting for three-quarters of shipments in Q3 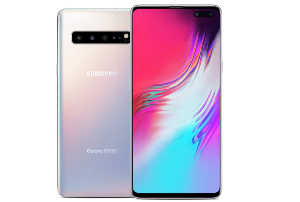 Samsung has carved out a commanding lead in the nascent 5G smartphone market, with the company accounting for three-quarters of worldwide shipments in the third quarter, according to IHS Markit | Technology, now a part of Informa Tech.

The company largely maintained the massive lead it built in the second quarter, when it held an 83% share of shipments.

“Samsung has come out of the gate running in the initial stage of the 5G smartphone business,” says Gerrit Schneemann, senior analyst, smartphones, at IHS Markit | Technology. “The company successfully capitalised on its home-field advantage in the fast-developing South Korean market to rapidly ramp up shipments. Samsung also has moved quickly to fill out its 5G smartphone line, giving it the largest portfolio of any brand.”

South Korea has been a pioneer in the 5G market, with its wireless operators commencing service in April. This deployment has redounded to the benefit of Samsung and fellow South Korean smartphone brand LG, which ranked second in the 5G smartphone market in the third quarter. Both Samsung and LG have offered aggressive promotions in South Korea, allowing them to quickly claim the top market-share positions.

The development of the South Korean market also contributed to the overall growth in 5G shipments, which more than doubled between the second and third quarters.

Samsung has the largest 5G portfolio

Samsung currently has five 5G models in the market, leading all OEMs. The Galaxy Note 10 Plus 5G was the leading 5G model in the third quarter, shipping 1.6 million units, according to the Smartphone Model Market Tracker from IHS Markit | Technology.

“Samsung is integrating 5G connectivity in a broad range of devices, from the Galaxy A90 to the Galaxy Fold 5G,” adds Jusy Hong, smartphone research and analysis director at IHS Markit | Technology. “The Galaxy Fold’s combination of new display technology and 5G connectivity shines a light on the potential of multiple technologies to transform the mobile user experience.”

Although Chinese OEMs account for more than half of the global smartphone market, their share of 5G smartphone shipments totaled only 17% in the third quarter. This small share is due to the fact Chinese-made 5G models mostly shipped to overseas markets, where the majority of smartphones these OEMs sell are mid-range and low-end devices.

The Chinese OEMs don’t enjoy the same level of recognition as high-end brands, which consumers believe they can trust to be suppliers of first-generation 5G devices. OPPO, for example, is using its 5G smartphone as a brand-building product to expand its sales in Europe.

As 5G services in China begin to roll out, 5G smartphone shipments from Chinese OEMs will start to increase significantly. Furthermore, Samsung is a non-factor in the Chinese smartphone market, eliminating a key competitor for the domestic brands. 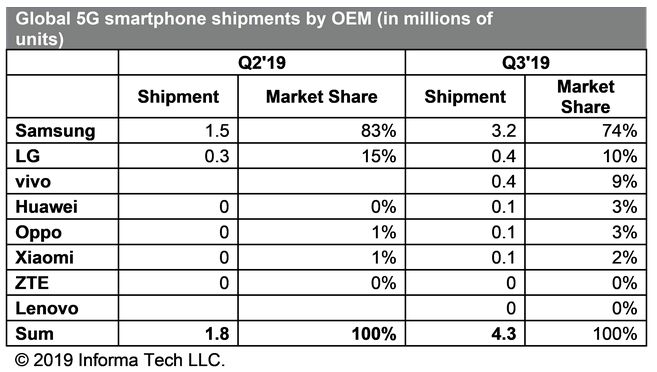 Shipments limited by hardware pricing in 2019

All 5G phones shipped in 2019 are powered by the latest high-end chipsets and follow the premium specification, which requires premium pricing.

The average price of 5G smartphones in the second quarter was $1,153 (€1039). Prices dropped slightly in the third quarter, falling to $994 (€986). However, the pricing range is becoming more diverse, with some OEMs targeting high-end prices around $600 (€541) for their 5G phones, while flagship devices like the Galaxy Fold push pricing ever higher.

As more 5G networks go online and reach larger parts of the subscriber base, 5G services will help position 5G-enabled handsets as attractive upgrades to existing phones in advanced markets. Furthermore, a broader range of 5G-enabled devices will soon be available as chip makers expand their 5G connectivity options beyond flagship hardware to reach mid-range devices. 5G smartphone demand in 2020 is expected to reach 253 million units.

“5G devices enable smartphone OEMs, carriers and service providers to offer new handsets with a feature set that is not backwards compatible as existing 4G devices will not be able to connect to 5G networks,” Schneemann said. “Here lies an opportunity for the entire ecosystem to reverse user behavior, from increasing device lifecycles to delivering an upgraded mobile experience.”