As we expected, the 5G experience is evolving quickly. We already see increases in maximum speeds after just two months. While in most countries there are still small numbers of 5G smartphones, in South Korea there are already over 2 million 5G users.

The U.S. again tops our table, with a maximum download speed of 1815 Mbps, but is now joined by Australia, Switzerland and South Korea where users also experienced speeds over 1 Gigabit per second. This is particularly notable because 5G smartphone users in those three countries are connected by mid-band 5G spectrum — typically 3.4 – 3.8 GHz — and not the higher capacity mmWave used by most U.S. operators for 5G at the moment.

Mid-band 5G is not just the most popular type of spectrum for early 5G launches, it is now rivalling mmWave for maximum speed, as well as offering wider geographic reach. However, available spectrum for 5G use on these 3.x Ghz bands is scarce in the U.S. and in many parts of southeast Asia. 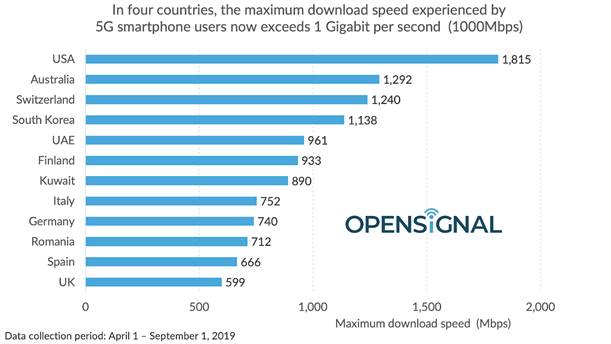 In most countries, the maximum speed experienced by 5G smartphone users has increased in the two months since we last ran this analysis. Of the eight countries we analysed in July, only the U.S. has seen no increase in the maximum download speed, likely because these are already so fast. But in the U.K., Switzerland and South Korea the increase in maximum speed is under 10%.

We have included a number of new 5G countries this time. Germany jumps over Spain and the U.K., despite its later 5G service launch, with a maximum speed of 740 Mbps, as do both Romania with 712 Mbps and Finland with an impressive 933 Mbps. 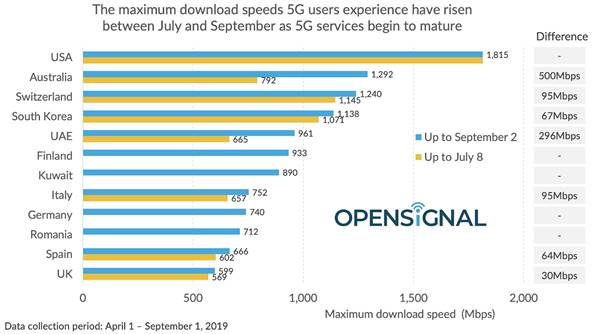 At Opensignal we focus on analysing the true end-to-end network experience of mobile users.

Our approach means the speeds we measure represent the typical real-world experience of smartphone users. This means other speed tests which use dedicated test servers that are often located very close to a user inside the same operator’s network will inflate speeds compared with Opensignal’s real-world measurement of maximum speed. To measure the real-world experience accurately, Opensignal’s tests connect our users’ smartphones to the same servers that host all the popular mobile apps and websites which all smartphone users connect to daily.

It’s still very early days for 5G, and coverage is still limited. There are only a handful of 5G smartphone models available. And, the version of 5G operators have deployed is the very first version of 5G which still relies on a smartphone connecting simultaneously to a 4G signal — non-standalone mode. All of this will change and improve with the upcoming second version of the 5G standard.

At Opensignal, we will continuously track the evolution of 5G and quantify how the experience develops over time. This ongoing analysis is critical for a new and emerging technology like 5G.