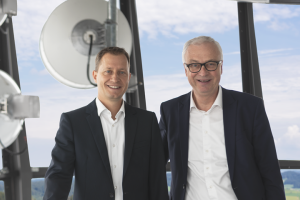 Dominik Müller and Jean-Paul de Weck (From left to right)

Dominik Müller has been part of Swisscom Broadcast for more than ten years, and has been a member of the Management Board for the last four. He has amassed 20 years’ experience in the ICT industry. Müller (44) studied electrical engineering and business economics at Bern University of Applied Sciences. He completed his formal education with an EMBA in General Management.

Chairman of the Swisscom Broadcast Board of Directors, Mario Rossi, extended his own welcome. “I would like to wish Dominik every success in his new role and look forward to working with him. Anyone who knows him knows that he will lead Swisscom Broadcast with passion and an unwavering focus on the customers and the employees.”

Current CEO, Jean-Paul de Weck, will be entering retirement in early 2020. Jean-Paul de Weck is considered one of the pioneers in the development of mobile communication technology. He played a major role in shaping the transformation of Swisscom’s network operations following the deregulation of the European telecommunications market.

As CEO of Swisscom Broadcast since 2008, he has successfully overseen the company’s evolution from a traditional broadcast business to a full-spectrum solution provider of radio communication, video surveillance, event and media services. “I would like to thank Jean-Paul for his exceptional contribution and wish him all the best for his well-deserved retirement,” said Mario Rossi.