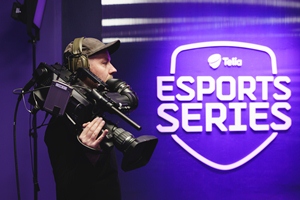 The Telia Esports Series is not only designed for the players but also for the viewers as the weekly league is broadcast on the Finnish national television and internationally through the Twitch channel. Telia is running the Telia Esports Series with the company Assembly, and the starting tournament featured the Counter-Strike: Global Offensive computer game, and the Arena of Valor mobile game. The total prize money is €50,000, and the top esports teams in Finland will compete in the series.

Using pre-existing studio and remote facilities owned by the production company Streamteam Nordic and leveraging cost-effective virtual studio tools, Broadcast Solutions provides Telia with a flexible and individual production setting that best fits their needs and enables the maximum use of existing infrastructure.

Esports have become hugely more popular in recent years, and competitive gaming has become a business generating hundreds of millions of dollars. Tens of millions of spectators watch major international tournaments. With the existing studio and remote production hub plus virtual reality tools, Telia says it has all the necessary resources at hand to fulfil its dedicated task, and to make Finland a leading country in esports.