Can network transformation pave the way? 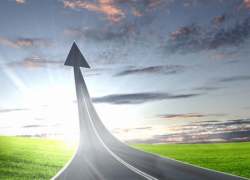 There are good reasons why. Many of the operational and business support systems (OSS/BSS) CSPs use are the same ones deployed before the era of broadband communications, yet networks have been upgraded regularly (in some cases replaced) as mobile technology has evolved and as CSPs have deployed fiber, says Mark Newman, chief analyst at TM Forum.

But network transformation can, and often does, serve as a catalyst for change in other parts of the business. Network functions virtualisation (NFV) is part of high-profile strategic programs that are even broader than digital transformation programs. Examples include:

In practice, network transformation cannot be isolated as a separate initiative from digital transformation programs. Networks need to be managed and connected to a whole range of business and customer functions. CSPs understand that these systems, traditionally referred to as OSS and BSS, must be completely redesigned to benefit from the real-time, customisable capabilities that virtualising the network and moving it to the cloud can deliver.

Moving to the cloud

Many CSPs are now moving parts of their networks into the cloud and deploying NFV and software-defined networking (SDN). Half of respondents to our survey said they are already virtualising at least some network functions, and 32% plan to do so in the next 12 months. 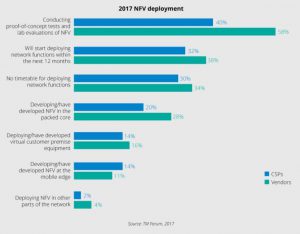 This represents a healthy increase from our survey in 2016 when only 36% of operators were deploying virtual network functions (VNFs).

Where are CSPs deploying VNFs?

There is no agreed approach for how, where and when to deploy VNFs. We asked CSPs about functions in three specific areas:

One in five respondents said they are deploying NFV in the packet core. This figure is surprisingly high given that most CSPs would be unwilling to deploy non-standardised solutions and that 3GPP – the standardisation body responsible for 5G – won’t produce a new standard for the 5G packet core until the end of 2018.

Delivering virtualised CPE and offering network as a service (NaaS) is one of the hottest segments of the NFV market, with significant carrier activity in Europe and North America. This is because it’s an easy business case to prove: Reducing truck rolls to customers’ locations lowers OpEx significantly.

At the mobile edge, NFV deployment will be essential for CSPs to deliver the millisecond latency promised for 5G. It will also enable CSPs to push data center functions out to the edge of the network, which will become crucial as the number of IoT devices increases. It will be necessary to process data from those devices locally.

CSPs are conducting huge numbers of trials as they work to build business cases for NFV and SDN deployment. Indeed, several suppliers privately expressed their frustration about the number of proofs of concept they are being asked to run before transitioning to a commercial relationship.

Close to a third of operators said they have no plans at all for NFV deployment. These are typically smaller CSPs, many of them in emerging markets.

The industry finds itself somewhat in limbo, recognising that NFV and SDN are the future but at the same time being uncertain about how to get there. Some of the biggest challenges relate to the commercial relationship between supplier and operator, while other issues are similar to the inhibitors to digital transformation more broadly – culture, skills and organisational alignment.

We asked survey respondents to rate the seriousness of several potential inhibitors to NFV deployment, where ‘1’ was not serious at all and ‘5’ was very serious. We’ve ranked them below based on their average rating.

It’s significant that the lack of a compelling business case was the biggest business inhibitor cited by both CSPs and suppliers, with 42% of CSPs and 43% of suppliers saying it is a ‘very serious’ or ‘moderately serious’ challenge. 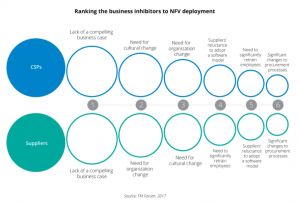 What are the technical challenges?

The need for new agile OSS/BSS and sophisticated orchestration capabilities are among the top operational concerns for CSPs and suppliers, with more than 50% of each citing OSS/BSS as a significant challenge. Perhaps expectedly, suppliers are less concerned about the immaturity of current products and standards. Only 12% of them see the lack of standards as a ‘very serious’ inhibitor. 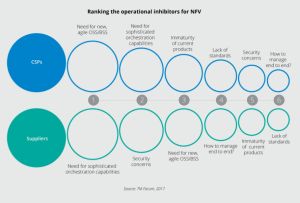 Not if, but when

This is not to say it will be painless. Indeed, one senior executive in a network division referred to the “chasm” that exists between the state of its current network organisation and where it needs to be.

To bridge this chasm, CSPs will need to:

The author of this blog is Mark Newman, chief analyst at TM Forum