From transmission to attrition? How telcos and OTTs are disrupting the traditional broadcast industry 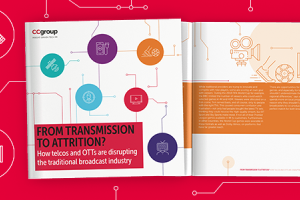 A new eBook from CCgroup’s MediaTech team outlines the role of telecom network operators and over-the-top service providers (OTTs) in the broadcast industry, and the vendor opportunity.

In recent years, there has been a huge shift toward video being distributed and accessed via the internet — and research suggests that this trend appears to be growing.

Traditional broadcasters now face competition from OTT players like Netflix, as well as from telcos — Telia, AT&T and Telefonica have all recently done deals that put them in direct competition.

But are telcos there to threaten or assist traditional players? And how can traditional broadcasters ensure they remain competitive in the media and entertainment market?

This report from CCgroup looks at: