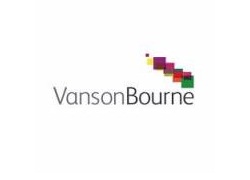 Concerns are being raised about the ability of Europe, Middle East & Africa (EMEA)-based organisations to deliver on their innovation strategies in the coming 12 months. A survey by Vanson Bourne, commissioned by Rimini Street, suggests that faced with challenges, such as too much being spent “keeping the lights on” with existing IT systems,and an unconvincing attitude from the board towards innovation and political and economic uncertainty, companies are worried they will not able to invest as much as they want in innovation.

Although 90% of respondents support increased spending on innovation, 70% are worried about how they will fund it. At a time of heightened urgency to implement digital initiatives to fend off competition, the findings raise the concern that sustained financial and political uncertainty in the region has led companies to become more risk averse and wary of investment in innovation.

However, concerns about under investment combined with external uncertainties and organisational challenges make for worrying reading. This point is underlined by the number of respondents who personally believe their organisations should be spending more on innovation, which raises questions over the organisational appetite for risk.

Although, respondents say their companies are likely to spend 9.49% more on average in the next 12 months on IT innovation, they personally believe their organisations should be spending on average 13.68%.

When productivity has become such an important watchword for competitiveness in this region, it is clear that although survey respondents recognise the importance of innovation, there is still significant inefficiency within EMEA IT infrastructures.  This is backed up by the revelation that 83% of EMEA respondents’ organisations are dependent on IT customisations, which equals the Americas and is worse than Asia Pacific (79%).

The figure rises dramatically to 92% in the UK, far ahead of DACH (78%) and France (84%).  However, that the three leading economies in EMEA are so dependent suggests there is significant room for improvement.

This danger is emphasised when respondents cite the top three risks to IT which will disrupt their organisations’ ability to innovate.  While cybersecurity is the most common concern (61%), legacy IT systems (50%) are listed as the next most common concern in EMEA, which rises to 70% of respondents in the Nordics and sits at 50% in DACH, 36% in France.

The Board is not ‘on board’

If financial and operational IT issues are concerning, perhaps more worrying is the implication that the board is not properly engaging with innovation. From a strategic perspective, if EMEA is to compete with other regions around the world, then boards must be committed to sponsoring the disruptive changes that come with innovation. However, 69% say that a lack of board support for significant investment in innovation is a blocker for the adoption of disruptive technologies.

This rises to 86% of respondents in the Nordics and 80% in both the UK and France. The research delves into this issue further and the most respondents across EMEA (68%) complain that the board does not see its role as strategic enough to deliver innovation, which is troubling when the survey is made up of senior IT and finance decision makers.

Furthermore, 65% say that although the board supports innovation, it shies away from complex IT projects in an era when lasting digital transformation requires fully integrated reform of IT infrastructures, suggesting the board is more of a hinderance than a help to change.

The data shows that 61% of respondents say the board is more focused on cost cutting than innovation.  At a time when leadership is crucial to the success of innovation initiatives that will allow EMEA-based organisations to compete on the world stage, it seems senior executives are becoming risk averse at precisely the moment when they should be more aggressive.

While internal forces are clearly limiting the ability to innovate, respondents also claim that external challenges are causing issues. 46% of those surveyed in EMEA said unpredictable political and economic situations were one of the top three biggest threats to their organisation, compared to only 37% in Asia Pacific and the Americas. 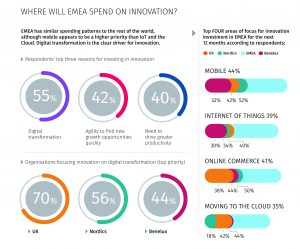 Among the different countries in the region, the Nordics were the most likely to report unpredictable politics and economic situations (58%) as a top three threat to their organisation. Separately in listing out the top three risks to IT across EMEA, 37% said Brexit and 29% said GDPR would be an issue.

The UK had the most respondents (58%) who said that Brexit would be the biggest threat. Clearly, this uncertainty does not create the best conditions for EMEA organisations to invest in innovation and it is clearly a contributory factor to the negativity coming from the region.

Time to get EMEA ‘fit for innovation’

Judging by this research, EMEA is already behind its global counterparts, as the average revenue increase (13.40%) due to innovation investment in the region is lower than that experienced in the Americas (14.28%) and Asia Pacific (14.24%). Combined with the significant number of respondents (44%) saying their organisations are worried about the threat of digitally-savvy and emerging market competitors, EMEA needs to urgently review its approach to innovation.

It needs to address the issues around innovation, including funding, driving greater efficiency in existing infrastructures, getting the board more engaged and confident about complex digital transformation initiatives, and overcoming worries about uncertain political circumstances. Otherwise, there is a danger EMEA businesses will simply talk themselves out of taking the risks needed to compete.

To date, the primary responses for getting EMEA “fit for innovation” seem to focus on investment in professional development initiatives (53% of respondents cite this as the most likely approach) and investing in areas of IT infrastructures to support innovation (51%).

These are perfectly valid approaches, but investment in change management programmes to embed innovation into company cultures is only the third most likely option at 40%. If organisations are to accelerate the pace of innovation, then organisations must be prepared to embrace more disruptive change.

Work on core IT muscles

This is easier said than done given that resources and time to support new initiatives is so limited.  Rimini Street believes the key is to reassess approaches, identifying those core IT systems which are crucial for the organisation to run, and working with partners to deliver those areas of the IT infrastructure that are non-core. This will allow organisations to divert resources and make time for more effective planning of wholesale change, which will deliver significant value to the business.

It is even possible to take this approach one stage further and identify partners who are not just delivering services to businesses to support their IT infrastructure but are also delivering innovations that allow companies to extract more value from existing infrastructures.

While many respondents taking part in this research are keen to drive innovation by extracting more value, they also see this as a significant blocker to successful innovation. Adopting a partner, who can deliver services plus innovation can significantly enhance the value of IT assets within an organisation.