Strategic Insight for Mobile Operators from the Mobile Video Index 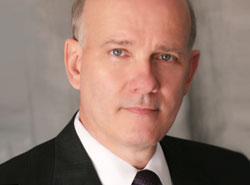 A new report from Openwave Mobility provides observations from real-time measurements of live traffic on mobile networks throughout the world. With the Mobile Video Index, mobile operators can understand what is happening right now in mobile broadband, and more importantly, prepare for what mobile operators face.  One of the most startling observations is that mobile data traffic will increase by 9x in the next few years. This is not just TCP traffic but also includes new traffic and protocols such as UDP, Google QUIC, and Facebook Zero.  Mobile video is rapidly transitioning to High Definition (HD) as shown from Figure 6 from the Index. 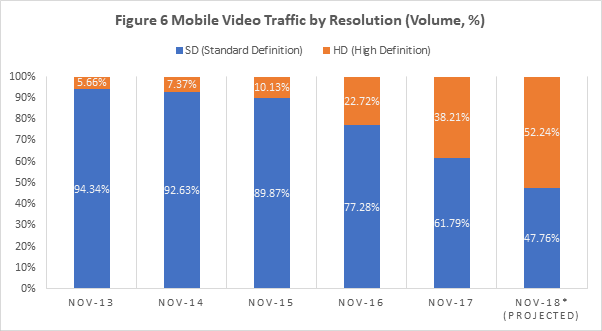 Mobile broadband has come a long way since the early days when mobile video could be thought of as dancing hamsters and cat videos.  When mobile broadband networks were initially deployed, operators resisted mobile video but quickly learned that although it is difficult to monetize, subscribers demanded good video Quality of Experience (QoE).  Mobile video performance quickly became a competitive differentiator and is quickly evolving to table stakes for operators to remain relevant.

The rise of encrypted mobile traffic also applies to video, and total encrypted traffic will reach 90% very, very soon.  Encryption makes traffic management impossible with legacy technology, such as with basic DPI and video tools like transcoding and compression. Fortunately, Openwave Mobility clients have a complete suite of traffic management tools uniquely suited for mobile video that address these issues and equip the mobile broadband operator to ride the video tsunami to greater success.

The growth of video is built on the foundation of faster networks, decreasing device price, and declining tariffs. This is accompanied by near buildout of 4G networks and the downward pressure on equipment costs.  The Global Mobile Suppliers Association notes that the industry will probably have 700 LTE networks deployed in over 200 countries by the end of 2017. This is definitely in the upper-right side of the S-curve.  In addition, about 30% of these networks have (or will soon be) LTE-A / LTE-A Pro, delivering greater capacity and improving the video experience.  Higher overall data rates include the peak or theoretical speeds, but more importantly increase the overall capacity, which pushed down the Cost per Gigabyte, setting the stage for even more video traffic.

Smartphones – with higher resolution – are getting cheaper. Subscriber saturation shifts the smartphone demand from new market sales, to the much more sedate replacement market. This creates competitive pricing among mobile vendors.  This increase in affordability opens the mobile broadband door to a larger population. Large screen mobiles become prevalent and sets the stage for a more compelling video experience. Subscriber saturation also means new customer acquisition is increasingly competitive and must come from competitors.

High performing networks, compelling mobile devices, and lower costs is driving a sea change with mobile video. Today, an increasing number of applications and services incorporate mobile video.  Some research indicates developed markets can average five hours of video traffic per subscriber per day, though this is partly due to multitasking when video is playing but not necessarily consumed.   Social media mobile video traffic will double while the overall time a subscriber spends with video will increase by 25% or more for the next four years. Wire-line and Wi-Fi will handle a lot of this traffic, but mobile broadband will continue to capture its share as well. Over 820 million people across the world watch YouTube and Netflix on mobile devices.

AI-based digital assistants, such as Amazon’s Echo Show, are starting to embed video screens. These digital assistants will evolve to incorporate more video.  The deployment of digital assistants as smartphone apps will drive increase in usage with the resulting video traffic. This is just one example of increased video demand that comes as a result of new technology and business models enabled by mobile broadband.

All of this leads to increasing both the time and video load a subscriber presents to the network.  Monetizing mobile data is important to grow operator revenues. In saturated markets, the best and most likely path for revenue growth is by monetizing the super users of video. A pricing plan that encourages the super users to consume (and pay for) more video is a way to extract a greater share of the subscriber’s wallet.

In addition to video super users, 25% of the subscriber base might account for about 35% of the consumer spend, and those subscribers should be encouraged to consume more.  Sports fans are probably the most dedicated video consumers, and streaming of live events are additional opportunities for operators to generate new revenue.

The advent of LTE-A Pro, and soon 5G, points to Virtual Pay TV that can present a compelling bundle for subscribers, including the opportunity for operators to zero-rate proprietary video services as a bundle.

There has never been a more exciting time for mobile video that now, and in the future, the excitement will only increase. Mobile operators that ride the mobile video tsunami will thrive and prosper by delivering on the promise of all that 4G and 5G mobile broadband can deliver.  However, maximizing profitably in mobile broadband requires traffic management technology suited to the evolving mobile broadband environment with particular attention to mobile video as a means to generate new revenues.  Be sure to check into Openwave Mobility traffic management solutions – they are the best suited to monetize mobile data – and stay one step ahead of the competition.