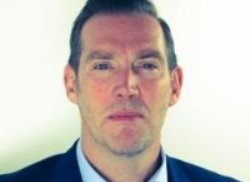 James Morgan: My first job was a Saturday job as a shelf stacker at Waitrose, up at 6am to catch the bus – horrendous for a 15 year old adolescent! My first full time job was as a junior salesman at Dunn & Co, a real “Suits you, Sir” type of establishment.

This was an introduction to the art of sales where I learnt a huge amount from a wizened old man call Tom. There was a real pecking order in terms of selecting the customer and Tom seemed to be able to smell who had money and who just wanted a flat cap, based on appearance.

He once sold a 38” Short and a 46” Long to the same customer! The commission was good, for retail, and I loved the camaraderie and banter of being part of a team. I made a conscious decision that sales was what I wanted to do from a career point of view.

James Morgan: I was travelling around Europe in 1990 and got a letter from a school friend who was working for a networking distributor called Micro Macro who focused on 3COM and Novell software – I don’t remember the entire contents of the letter, but I do remember he said he was working for a great company, earning lots of money and cruising around in an Astra GTE – they were looking for sales guys and was I interested? I later found out he got a significant referral fee for me.

They were the heady days of fax machines and early finishes on a Friday. I worked for a number of distributors over the years until the first telecoms-specific role came along, when I was asked to run a business called Data Connectivity that sold Lucent and Mitel, amongst other vendors, to enterprises and fledgling alternative service providers, such as Easynet.

VanillaPlus: Without naming and shaming, tell us about your worst ever boss?

James Morgan: I wish I could go into juicy detail about one of them, but the reality is that I have always focused on taking the positives out of any situation and have worked for some inspirational leaders over the years. I have also had the luxury of choosing who I work for most of the time.

Although now I come to think of it, there was one particularly un-savoury character, who was an inside-sales manager for a company I worked for in Slough in the early 90s. I used to drive two other sales colleagues up from Southampton daily and would get into trouble for being even five minutes late, despite leaving at 6am every day and having to negotiate the infamous Hockley traffic lights at Winchester.

James Morgan: The most memorable would be a period of travelling to Mumbai. I went about four times in the space of a month. It was an intense bid period and the combination of travelling and working, combined with the beauty and majesty of India, definitely stands out for me. Due to the time difference and the flight times you can actually work 20 hour days and not suffer jet lag! The country and people were truly amazing, huge innovation and competitiveness, combined with wonderful humility and hospitality.

The other time was when I was sitting in Business class on a plane and an English guy inadvertently knocked a full glass of red wine onto the lap and seat of an American traveler – the cultural difference was very apparent and the American made the English guy sit in his seat and pay for the trousers to be cleaned – most entertaining!

VanillaPlus: What has been the proudest moment in your career so far?

James Morgan: Building a team of truly amazing people and building a major telecoms and IT provider from humble beginnings was fun. Having started out in my business partner’s kitchen, we grew to a £60m business that sold mission-critical networks and managed services to many leading brands and organisations.

We sold the company in 2015 and I genuinely loved every minute of it. I have to say this is a very close second to being appointed the VP for UK & I at Juniper Networks, a company that we built our business around for 14 years and one that I am hugely passionate about – I am proud because I know my family are proud of me, in reality it is a job that I always wanted.

VanillaPlus: Where do you see yourself in five years?

James Morgan: I would like to work abroad in some capacity. Once the children have left home, my wife and I would like to live abroad, most probably in the US. I had the pleasure of opening offices on in New York and San Francisco a few years back and we both love the Bay area. I would like to think that I will still be at Juniper Networks, contributing in some way.

The industry will go through increased change in the coming years and I would like to be helping to lead that transformation with a company that is both innovative and disruptive.