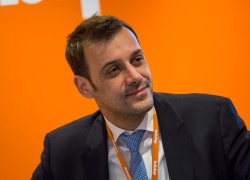 Silvio Kutic: One of my first jobs was working part-time for a local power utility company. It was four hours a day. One day I went for lunch and I never came back, because I had decided to work on my business idea.

What led you into a career in telecoms?

Silvio Kutic: It all started with Virtual Community, a software solution intended for my hometown. It was essentially an early idea for a local social network. I developed and implemented it with my brother and a group of friends at the end of 2002.

Virtual Community led us to see the potential of A2P (application-to-person) messaging. Soon after implementation we realised that SMS messaging was by far the best accepted channel, and that it had the best potential for building seamless communications.

It was the starting point of our future orientation to telecoms capacities and how they can be put to use in professional communications. We soon pivoted Virtual Community into a platform for A2P messaging, which determined our direction and ultimately led to the founding of Infobip in 2006.

For a number of years now we’ve been working with telecoms to build and expand the A2P SMS industry, by providing them with the expertise they don’t necessarily possess – how to optimise and monetise their messaging capacities, deploy SMS firewall solutions and shape their offering for the demanding enterprise market.

Without naming and shaming, tell us about your worst ever boss.

Silvio Kutic: I’ve been my own boss for so long that it’s fair to say that I’m both my best ever and worst ever boss, because this boss lets me be creative and do things my way, but also has the harshest criticism and will never let me off the hook.

Silvio Kutic: Since founding Infobip over a decade ago now, I’ve had the opportunity to travel to many interesting places across the globe. I once travelled around the world one and a half times over in just 12 days. I started in Argentina, then visiting Cape Town and later on Johannesburg, Dubai, Kuala Lumpur and Hong Kong. From there, Detroit and Atlanta were next, and then Cancun, Mexico City, Atlanta, and then the last leg of the journey was back in Europe to Rome and Trieste.

When Infobip started expanding outside Europe, for a couple of years I was constantly aboard airliners and lived in at least two countries a week. I spent two months living in Miami, after which I moved to Buenos Aires for eight months, and then to Brazil and Colombia. I also spent several months living in Asia, Africa and California.

What has been the proudest moment in your career so far?

Silvio Kutic: It was the day I went for my lunch break and never came back.

Where do you see yourself and Infobip in five years?

Silvio Kutic: I believe I’ll still be at Infobip, which will still be working on fulfilling our never-ending mission, to create seamless interactions between businesses and people. Over the last five years the communications landscape has seen big changes with the rise of omnichannel messaging and this evolution is only set to continue with advancements in chatbots and other technological developments.

We’re investing many resources in expanding our technologies and our communications platform in line with the demand of our enterprise customers who are looking to keep up with the changing habits of consumers, adding new channels and developing chatbot and AI (artificial intelligence) solutions.

In five years, the work, which is now in its nascent stages will be well established or will be close to maturing, making chatbots and AI communication solutions in general an integral part of people’s communication habits.