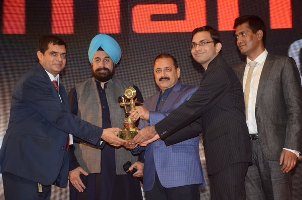 The awards are for bringing in innovations in both mCommerce and mMoney categories for its mobiquity® Money Merchant Payments and mobiquity® Money interoperability solutions. The two awards were presented to Mahindra Comviva by Dr. Jitendra Singh, minister of State for Prime Minister Office at the Aegis Graham Bell award ceremony held on the 27th of November at the NDMC Convention Center, Jantar Mantar, New Delhi.

This NFC payment solution is designed to facilitate seamless and contactless payments for mobile money users bringing payments experience in emerging countries at par with the developed markets.

Commenting on the achievement, Mr. Srinivas Nidugondi, SVP and head of Mobile Financial Solutions at Mahindra Comviva said: “We are honoured to receive the most prestigious award of the telecom sector as it demonstrates our market leadership in the mobile financial space as well as our commitment to bringing in innovation across the globe. We will continue to innovate and build a sustainable mobile payment ecosystem that will transform user experience.”

This Aegis Graham Bell awards is intended to promote innovation and entrepreneurship in the field of Telecom, Internet, Media & Edutainment (TIME) and to provide recognition for outstanding contributions in this field in India. The Awards  is organised with the support of Cellular Operators Association of India (COAI), and Telecom Centres of Excellence (TCOE) India – a public private partnership initiative of DoT with 08 Centres at premier academic institutes (06 IITs, IISc and IIMA) of the country, each supported by a Telecom Service Provider and knowledge partner Deloitte. The selection process of the Aegis Graham Bell Awards 2014 winners was based on various parameters such as innovativeness, market potential, social potential, sustainability and interoperability through a detailed methodology, reliable process validation and research conducted by Price Waterhouse Coopers. The jury is comprised of veterans from India’s IT and telecom industries.